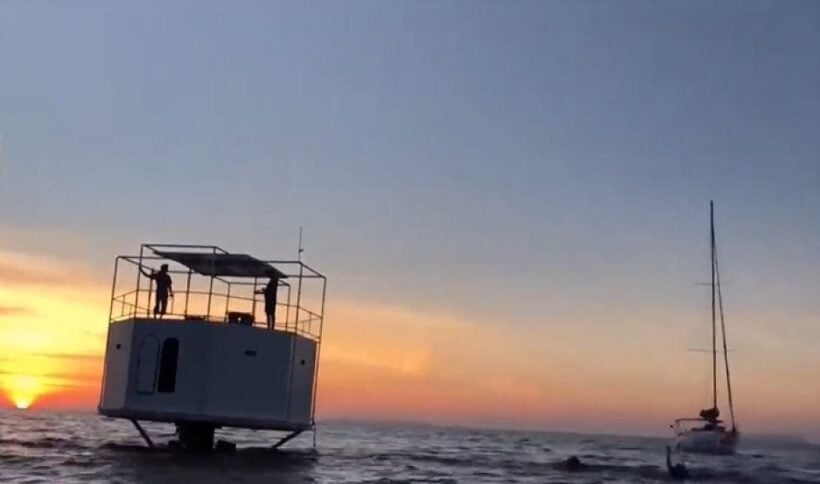 The perceived naiveté of the team surrounding the seastead structure off Phuket’s south-east coast are about to be tested as the matter is likely to end up in an international court.

Deputy PM Wissanu Krea-ngam says that the Thai government has the right to demolish the floating sea home and welcomed the threat of a lawsuit by its builder, Ocean Builders. Ocean Builders is a well-funded group backed by Peter Theil.

“Peter Andreas Thiel is an American entrepreneur, venture capitalist, philanthropist, political activist, and author. He is a co-founder of PayPal, Palantir Technologies and Founders Fund.”

The media narrative has been of a naive couple who wandered into the offshore lifestyle project and then went into hiding when questions started to be asked and the Navy came knocking at their offshore front door.

At the same time the Thai Government has rolled up its sleeves and showed its angry face claiming that the project was a threat to national sovereignty and security.

Some enthusiast local media included the threat of ‘death penalty’ in its reportage (covered in the Act relating to treasonous acts against the sovereignty of Thailand)  providing sensational headlines for international tabloids.

Speaking at a press conference at the King Prajadhipok’s Institute yesterday, Wissanu said Thai officials could remove the floating structure, which is located to the southeast of Koh Racha Yai, approximately 22 kilometres  from the Thai mainland, because its presence clearly violated Article 119 of Thailand’s Criminal Code as threatening the Kingdom’s security and sovereignty.

(These claims continue to be made by Thai officials without any explanation or evidence on how the 6 metre aluminium and steel structure threatens the country’s security.)

Wissanu says the structure would also be an obstacle to marine navigation as it is located near a sea drilling site.

But Wissanu kept pouring on the local rhetoric yesterday…

“The Thai government would be glad if a lawsuit is filed. We want a lawsuit to be filed so that we will have a chance to explain the truth.”

“Attempts have been made to build seasteads in several nations but no government had allowed them and builders were always arrested and legal action taken against them,” according to Wissanu.

“We are just beyond 12 nautical miles from shore. Under International law this puts us just outside of the territorial waters of Thailand but within their 200 nautical mile excusive economic zone. This means that we are not subject to Thailand laws other than those that deal with their natural resources (drilling for oil, mining, etc.) and no interfering with their customs (can’t act as a way to get goods and people into Thailand to get around their import and visa laws). As well as following the law of the sea which prevents “egrevious acts” such as murder, slave trade, etc.”

Phuket seastead will be removed today