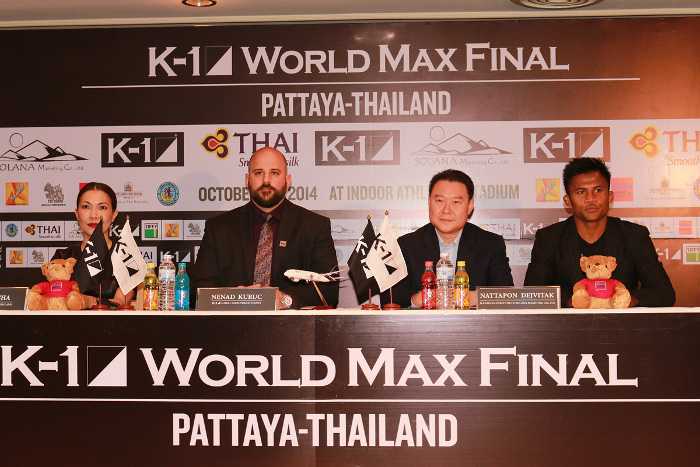 PHUKET: The world-renowned Mixed Martial Arts (MMA) tournament – K-1 World Max Final – is coming to Thailand on October 11. During the event, which will be held at the Indoor Athletics Stadium in Pattaya, Thailand’s martial arts fans will witness Buakaw Banchamekgoing battle it out with Enriko Kehl. The event will be telecast live worldwide. Should Buakaw be able to overcome his rival, he will be the first Thai fighter to ever win three K-1 championships.

According to the organizers, Nenad Kuruc, managing director of K-1 Global Holding, Pat Patcha, K-1 Thailand representative, and Nattapol Dejvitak, managing director of Solana Marketing Company Limited, the event will serve as a launching platform for all interested in MMA to develop a keener sense of sportsmanship, witness the demonstration of world-class fighting skills, gain experience, and foster strong determination to thrive towards being the best that they can be.

Mr Nenad stated that K-1 boxing focuses mainly on clean fighting, respecting the specific set of rules – such as no wrestling and no throwing elbows – holding and kneeing are allowed only once.

Miss Pat Patcha named a number of reasons that make the event unique.

“It is the first time a K-1 Max World Final will be held in Thailand. It will also be a decisive bout for Thailand’s two-time champion, Buakaw Banchamek, for if he can emerge victorious from the fight, he will be the first ever winner of three K-1 Championships. While if Eriko Kehl is victorious, it would make him the first German K-1 champion.”

K-1 World Max Final will be held at the Indoor Athletics Stadium,the National Sporting Center of the Eastern Region, in Pattaya, Chonburi Province on October 11, starting at 6pm. Tickets can be purchased at all branches of Thai Ticket Major starting at 1,000 baht and going up to 10,000 baht per ticket.

No order to ‘erase’ Thaksin from Phuket textbooks – yet