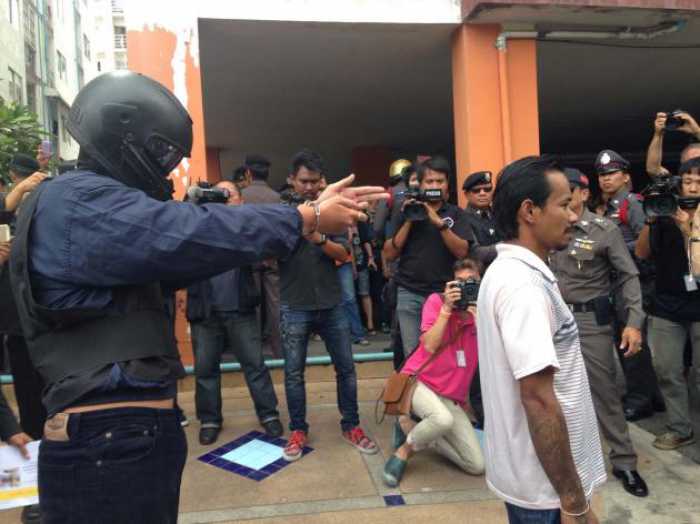 PHUKET: Six students are facing the charge of premeditated murder for fatally shooting three students from a rival college to take “revenge for a female friend” who was killed last month.

This case provides another glimpse into the bitter rivalry between students of the Rajamangala University of Technology Uthenthawai Campus and Pathumwan Institute of Technology, which has already claimed many lives.

“I did not want to see my friend’s attackers go unpunished,” Jitdilok Oumchu, a 21-year-old suspect from Rajamangala University, said yesterday. He was referring to the killing of Kankanit Promkaew, who was shot dead at a Bangkok bus stop on August 26.

However, Pol Maj-General Suwat Jangyodsuk, a deputy chief of the Office of Police Strategy, yesterday called on students from the two institutes to stop taking such matters into their own hands.

“Let the law run its course. It’s the duty of the police to find out who committed the crime and bring the culprit to justice,” he said, as he vowed to nail down Kankanit’s killer.

Jitdilok, meanwhile, said that if the police had tracked down Kankanit’s killer quickly enough, then his friends would not have had reason to kill three students from Pathumwan Institute of Technology.

The six suspects have been charged with premeditated murder and the illegal possession of guns and ammunition.

Separately, Kamjorn Tatiyakavee, secretary-general of the Office of the Higher Education Commission, yesterday summoned Panya Minyong, president of Pathumwan Institute of Technology, and Suebpong Moungchoo, vice president of the Rajamangala University of Technology Uthenthawai Campus, to look for ways to end this ongoing rivalry between the students.

Suebpong said his institute had not ignored the issue and had implemented several measures to prevent brawls. “We have installed security cameras and regularly conduct weapons searches,” he said.

Meanwhile, the chief of Pathumwan Institute said his school had strictly banned its former students from entering the compound.

Both schools believe its alumni have been sowing the seeds of hatred among the students.

However, Kamjorn insisted that the executives of both institutes must try harder to prevent such fatal incidents. “Or else, each institutes’ executives will face a disciplinary probe over perceived negligence,” he warned.

He also called on the police to work fast in nailing down those who are behind clashes between students.

Suebpong said he would provide the police with a list of the alumni suspected of sowing hatred among the students. “If you really love your alma mater, then please stop inciting the new students,” he said.

Panya, meanwhile, said he was saddened by the recent deaths of his institute’s students.

Kampon Kamplasiri, who lost his son in the school rivalry, said his family was still struggling with the loss.

“We can’t cope with what has happened, but we strongly hope our son’s death will encourage all sides to talk and find a sustainable solution,” he said.

Meanwhile, Prime Minister General Prayuth Chan-ocha told top government officials that the Education Ministry should review situations like this on a case-by-case basis and determine what punishment should be meted out to an educational institute whose students engage in brawls.

“Punishments should range from warnings to the closure of the faculty,” Prayuth said, adding that lax measures would only allow the problem to continue.