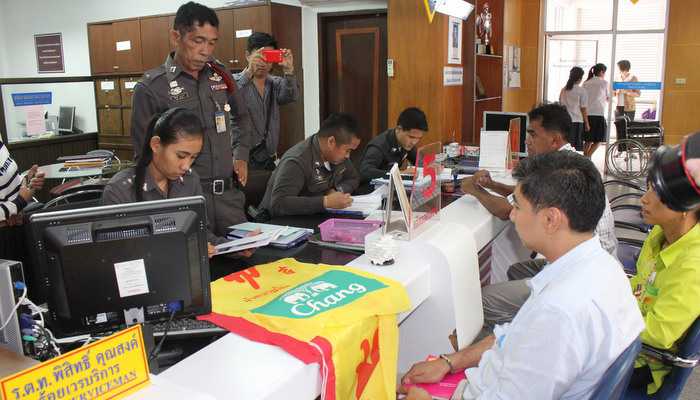 PHUKET: The Phuket Provincial Health Office (PPHO) has filed a complaint against those responsible for emblazoning flags heralding the upcoming Vegetarian Festival with Chang Beer logos.

Krit Sakulpat, deputy chief of the PPHO, led a delegation to Phuket City Police Station yesterday to lodge a formal complaint against ThaiBev, the company that produces Chang Beer, and Jui Tui Shrine for featuring the beer’s green logo on festival flags.

“We received a complaint that Jui Tui Shrine’s flags are promoting an alcoholic beverage. This violates the Alcohol Act B.E. 2551 on advertising and promoting alcohol, which carries a penalty of up to one year imprisonment, up to a 500,000-baht fine, or both,” noted Dr Krit.

He said that the flags had already been posted all over Phuket Town, including at the Seng Ho intersection, near Phuket Post Office, at Suriyadet Circle, on Bangkok Road, near Phuket Provincial Prison and at Saphan Hin.

“Alcohol is not something that should be promoted during the Vegetarian Festival. This is an event during which people are urged to do good things, including refraining from drinking,” Dr Krit said.

“It’s this kind of action that can lead to people losing faith in what has become a great festival.”

Dr Krit implored businesses not to use the world-renowned event to promote alcohol consumption.

“I urge every business operator not to promote alcohol during the festival. We don’t want the event’s clean reputation to be tainted,” he added.