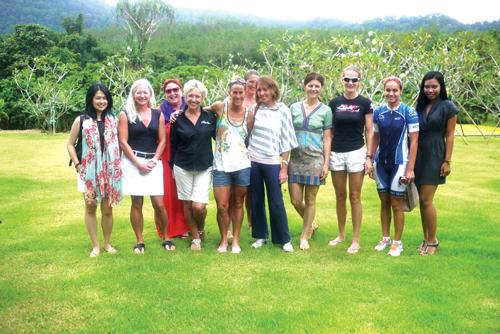 Belinda Granger is one of the most influential and successful triathletes Australia has produced, with an incredible 15 Ironman distance wins and five Top 10 finishes at the Ironman World Championships at Kona, Hawaii, putting her second in the all-time list of female Ironman champions.

Following her 10th and final appearance at the 2013 DATEV Challenge Roth event, the “Tour de France” of triathlon which attracts crowds of over 250,000 spectators to the hamlet, Ms Granger said she couldn’t wait to return to Thanyapura to conduct the workshop and training camp.

The workshop focused on the reasons why it’s good, and why sometimes not so good, to be a woman. Ms Granger also spoke passionately about promoting equality for women in professional sports.

“In Wimbledon, the prizes for women are much lower than for men. Some might say that it’s because women play two sets and men play three sets. So [the theory goes] women don’t work on the court as long as men, so they get less. But if you gave women a choice, they would be the first ones to say ‘we might as well play three sets, we don’t care’,” she said.

“But in triathlon they don’t have this excuse. Women run the same distance, compete on the same day and in the same conditions. I’d love to hear the director of such race explain why there are such differences in prize money.”

She also spoke about her personal approach to sport and the mental attitude she adopts when competing.

“I never get to the finish line and give an excuse. There are excuses in racing, don’t get me wrong. But I just don’t like it. When you turn up at a race, you race as good as you can and give it all you got.

“As long as you give your 100 per cent, it doesn’t matter if you come first or tenth or last to the finish line. As long as you know that you’ve given the best you have on that day, it’s not a failure,”
she said.

“I am 43 this year and I am nowhere near ready to give it all I still love the sport so much and I still feel I have so much to give. I am living proof to all those women out there who think they are too old to do triathlon, that you are never too old or too slow or too inexperienced.

“But you don’t have to compete in triathlons. Just notice something that keeps you energetic and lively and keep adding more of that element into your life,” she added.

The workshop was part of Thanyapura’s “Month For Women” held over August with a host of exciting activities and world class athletes gracing its campus in Phuket.

Besides the “Empowering Women Workshop” Ms Granger also con- ducted a three day, intensive “Women Only Training Camp” for female athletes. Speaking before the camp last week she told the Gazette about some of the topics and techniques that would be covered during the camp.

“I will be giving away many of the secrets to my longevity in the sport and maintaining a healthy balance between triathlon and lifestyle – something that many people struggle with,” Ms Granger said.

“I will also be talking about nutrition for training and racing. The camp is aimed specifically at women in triathlon. It does not matter what level you are at, the camp is open to women of all abilities, from the experienced racer to the ‘newbie’,” she said.

“The facilities at Thanyapura are second to none. There is nowhere else in the world where you have access to so much state-of-the-art equipment right at your finger tips. That is why my husband and I often stay there. It makes training so easy.”

Ms Granger ran the training camp in tandem with Thanyapura’s Triathlon Senior Coach, Jürgen Zäck, himself a legend in the sport and record-breaking, eight-time worldwide Ironman winner, whose Ironman Bike Course Record was 4 hours, 14 minutes and 12 seconds, which he held for 14 years.

Thanyapura President Robert Hauck said he was delighted to welcome Ms Granger and all the camp participants to Thanyapura and he said it was an important milestone in cementing Thanyapura’s leading role in transforming Phuket into one of the world’s leading triathlon destinations.

So go out – move, run, cycle or swim. It might be that you’ll just lose some weight and get healthier. But who knows, soon enough you might be running towards the finish line of a Triathlon. After all ,women have the power.