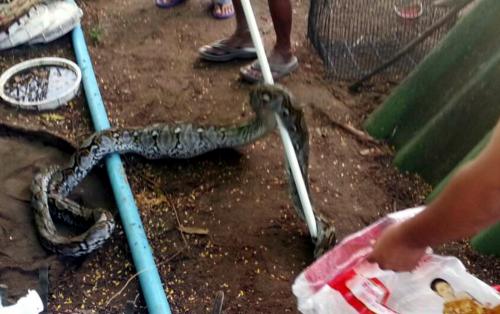 PHUKET: A Phuket python got into a chicken coop and devoured a prized breeding hen yesterday, while the fowl’s owner was away from home.

Sombat Sae-eow realized something was amiss when he came home and discovered the python, sporting a large bulge in its middle, lying under a bamboo chicken pen.

Kusoldharm Foundation rescue workers were called to the house in Baan Sakoo, south of Phuket International Airport, and easily captured the reptile, which had been rendered lethargic with digestion.

“It was about two meters long and weighed about 20 kilograms,” a rescue worker familiar with the routine said.

Mr Sombat bemoaned his loss to the Phuket Gazette. “I like raising chickens, and I have a lot of fighting cocks. The hen that was eaten by the snake was my best fighting cock breeder,” he said.

As usual, the python was released at an undisclosed jungle location.