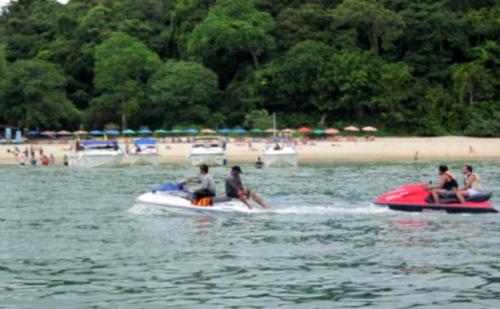 PHUKET: Police have yet to establish what caused a 27-year-old Iraqi tourist to die after he fell from his jet-ski at Naka Island, off the east coast of Phuket, yesterday afternoon.

“He was staying at a resort in Patong and went to Koh Naka on a day-trip,” Lt Col Kitthiphum explained.

“Jet-ski staff said they saw him fall off the jet-ski less than 500 meters from the beach at about 3:15pm, but they said he fell without hitting any object,” he added.

On seeing that Mr Salim was not attempting to get back on the jet-ski, the staff rushed out to assist him.

“They took him by boat to Ao Por Pier [map here], where the Pa Khlok Administration Organization rescue team sped him to Thalang Hospital. However, by then it was too late,” Col Kitthiphum explained.

The Iraqi Embassy in Bangkok has been notified of the incident.

“I haven’t received the report from the hospital as to cause of death. At this stage, all we know is that it seems he passed out before falling off the jet-ski,” Col Kitthiphum said.

“He was young and looked strong. However, he may have had an underlying disease that caused his death,” he added.

Phuket’s DJ Doris to be honored with Celebration of Life