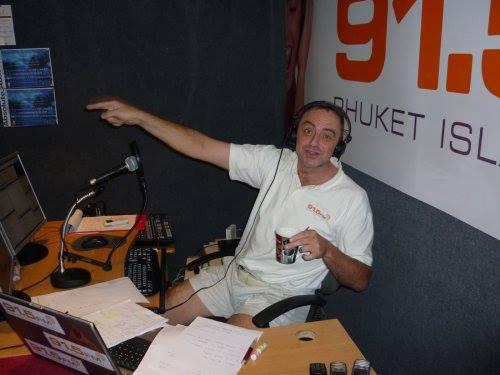 PHUKET: Paul Norris, Phuket’s renowned ‘DJ Doris’ from Phuket Island Radio 91.5FM, will be honored with a Celebration of Life.

The news follows the death of Mr Norris in a motorcycle accident early Sunday morning, a tragedy which prompted an outpouring of grief among friends, family and fans (story here).

“Paul Norris is being repatriated to his home in Scotland. As soon as we know the funeral arrangements, we will inform you,” said Byron Jones of Phuket Island Radio in a statement issued today.

“91.5 FM is planning a special ‘DJ Doris day’ to coincide with his funeral,” he said.

“Following Paul’s funeral, we plan to hold a ‘Celebration of Paul’s Life’ on a day and at a Phuket venue to be confirmed later,” Mr Jones said.

Anyone wishing to record a message for that day is invited to email support@phuketfmradio.com to arrange a recording time.

“We thank you all from Paul’s family and from ourselves for your kind messages and respect,” Mr Jones said.