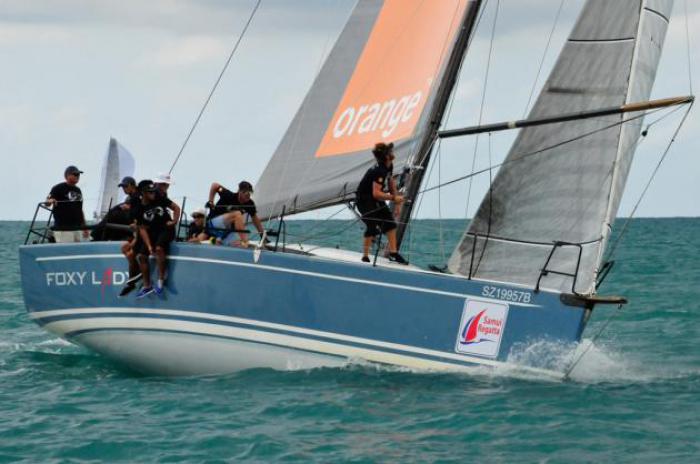 PHUKET: The 13th Samui Regatta got underway yesterday with a 23-strong fleet of mainly international boats competing in what has become known as the Tropical Island Regatta. With an impressive IRC fleet lining up to battle it out over five days, the first day proved to be both challenging and satisfying for fans.

Light to moderate winds, unusual for Samui at this time of the year, proved a challenge for both the sailors and race management, but a full racing program saw sailors return to shore with smiles on faces after some world-class racing.

First up were IRC Zero, with seven boats competing for the title this year. Regulars Jelik, HiFi, Freefire and Katsu were back and up against the Malaysian Navy on Uranus, Team Ulumulu and Oi!

Coming off the back of a win at the recent Top of the Gulf Regatta, Oi! could only manage a fifth in Race 1. The honors went to Neil Pryde skippering HiFi who scored a one minute win on corrected time over second place Uranus, with Katsu, at 45-foot the smallest in the class, placing a well-earned third.

In the second race, the honors went to Jelik who enjoyed the strong breeze early on and as the course was shortened the advantage was theirs as the other boats parked up in a dying breeze. Jelik took the win by a whopping 12 minutes on corrected time from HiFi in second with Sam Chan’s Freefire 52 finishing third.

While the headline battle in IRC One is between Foxy Lady VI and Red Kite II, the result of which will likely determine the winner of the 2013/14 AsianYachting Grand Prix championship, the eight boats in the class are all contenders for the class crown.

Bill Bremner and his crew on Foxy Lady VI took the first win of the series over Anthony Root’s Red Kite II with Elektra, from Hong Kong and skippered by Marcel Liedts, in third.

Bremner continued his winning ways, claiming Race 2, while Elektra went one better than in the previous race to finish second ahead of Singapore boat Windsikher.

The all-Thai crew on Sansiri, led by Patinyakorn Buranrom, took the first win in IRC Two, edging out the 52-foot El Coyote by a little over three minutes on corrected time. While local entry Moon Shadow, the smallest in the class, placed third in the first race today.

Lifeguards back on Phuket beaches, ask PPAO to plan ahead