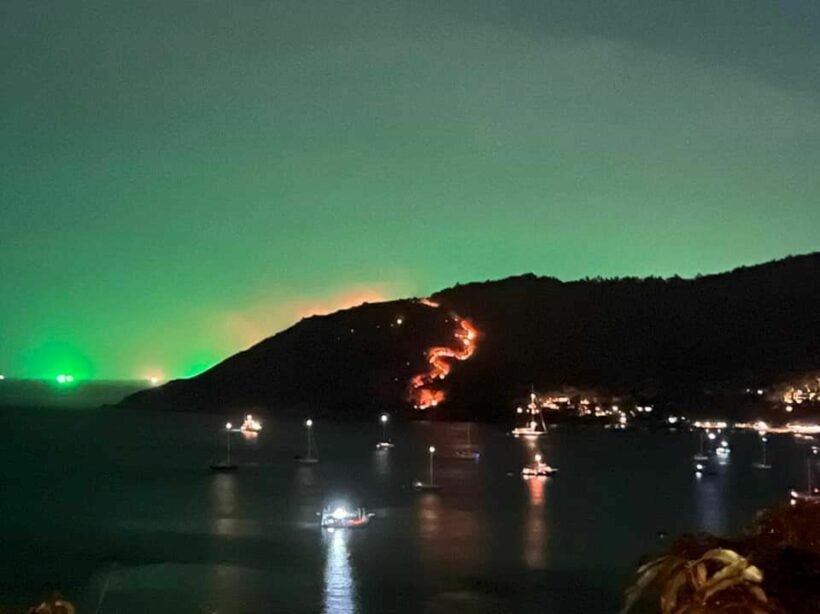 Around 16 locals and Thais were evacuated from a forest in Phuket after a fire broke out and spread quickly by the Laem Krating viewpoint by the Krating Cape. The flames blocked the exit and authorities had to send a boat to pick the tourists and others up at the bottom of the hill in Phuket’s Rawai district.

Phuket authorities shared on the provincial public relations page on Facebook that fires happen at Laem Krating almost every year during the dry season and are sometimes caused by cigarettes dropped by tourists.

The dried grass after days without rain, as well as strong winds, are said to have fuelled the fire, which spread over 20 acres. The authorities shared that it was hard to access the area to put out the fire because it lacks electric systems, has lots of hills and rocks, and the entrance was all closed by the fire.

As of yesterday, the fire has been under control and is being closely watched. Rawai mayor says that if the wind is calm, the fire will remain manageable, so the authorities must stand by and pay close attention to the situation and the winds. A drone is being flown over the area for real-time updates and visitors are not allowed in the area until further notice.

Jason
I suppose it's a natural occurrence in the dry season. I have to say, this is a surprise to me. Bushfires in a country with so much rainfall.

Guest1
5 hours ago, Jason said: I suppose it's a natural occurrence in the dry season. I have to say, this is a surprise to me. Bushfires in a country with so much rainfall. After only one week of no rain,…
harry1
been happening the last few high season,more occupying,new builds and workers living in a area of mostly forestry,the narrow roads are also crumbling away, due to more traffic