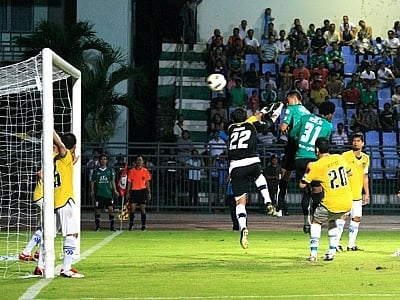 Just before the end of the first half, Nirun Phunthong set up Nene Bi Tra Sylvestre, who scored from close range with an easy header to put FC Phuket up 2-0.

Despite the comfortable lead, FC Phuket continued to press and stayed on the offensive at the start of the second half.

Chiang Mai were unable to capitalize on the few chances they had to counterattack, and Nitirot Sokuma, who had just stepped onto the field to replace Sarach, scored another close range effort at 77 minutes.

Watcharapong Jun-ngam, sent in to replace Kone Adama at 75 minutes, concluded the rout by heading home the final goal three minutes before the full time whistle.

(Note: scroll past the Thai text to the video player at the bottom of the page. It may take a few minutes to load.)

Despite being the only FC Phuket player to pick up a yellow card, left wing Nirun Phunthong was named man-of-the-match.

The win moved the Phuket team, nicknamed ‘Southern Sea Kirin’ into fifth place on 14 points, but they have played one match fewer than other teams at or near the top of the table.

Phuket coach Surachai Jirasirichote told reporters: “Our lads played extremely well and completely stuck to the plan. It made a big difference having Sarach and Choi Jai Won back in the starting lineup, which gives us more strength up the middle. I believe it makes a big difference.”

FC Phuket’s next match will be another home fixture, this time against Thai Honda, next Sunday, which is also National Labor Day.

Kickoff is at 6pm. Admission for adults is 50 baht, 20 baht for children.
Results of Saturday and Sunday matches:

For analysis, a league table and other Thai League Division 1 information, pick up a copy of the hard-copy Phuket Gazette due out on Friday, at a newsstand near you.