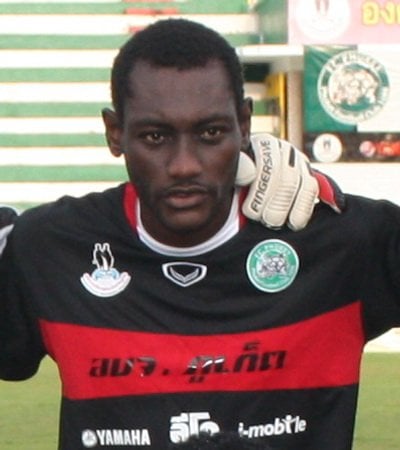 PHUKET: Celebrations of FC Phuket’s crucial 1-0 victory over Chainat last night have been muted by midfielder Camara Ahmed collapsing on field from a heart attack.

The Ivory Coast midfielder, on loan from Muangthong United, collapsed during the second half of the game and was resuscitated en route to Bangkok Hospital Phuket.

He is now in a coma in intensive care.

FC Phuket Manager Arjan Songssamsub said the players were too worried about Camara’s condition to celebrate the important win.

“I am happy we won, but I am more concerned about Camara’s health. He has never had any sort of problem like this in the past and this has come as a surprise,” Arjan Songssamsub said.

Camara has been almost ever-present in the heart of the FC Phuket midfield this season.

The team won Division Two (Southern Section) comfortably and are on track to gain promotion to Division One through the playoffs.

Thawin Butrasombat, signed from Chaiyapum United in May, scored the only goal of last night’s game with a header after 52 minutes.

Chainat were top of the group with two wins from their opening two games and this was a vital win for the Southern Sea Kirin, who had drawn both their play off matches to date.

To appreciate Camara’s skills, click here to see the midfielder score an impressive long-range goal away against Satun Utd in August.