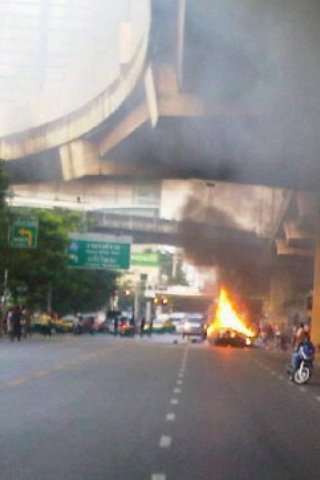 BANGKOK (The Nation): A packed transport van plunged from an expressway onto Rama VI road in Bangkok this evening before bursting into flames, killing at least eight.

The van swerved and hit the expressway railing near the Rama VI exit before plunging onto the road near Samsen School at about 5pm.

The van then burst into flames, police said, killing at the scene seven passengers. An eighth died in hospital. The dead were four women, two men, one boy and one girl.

Police believed there were 11 passengers on board.

Police extinguished the blaze and rescue workers used equipment to cut into the van to retrieve the injured passengers.

The wounded passengers were rushed to Ramathibodi and Wachira Hospitals.

Police sealed off the area to facilitate the rescue work. Motorists were told to avoid the road.