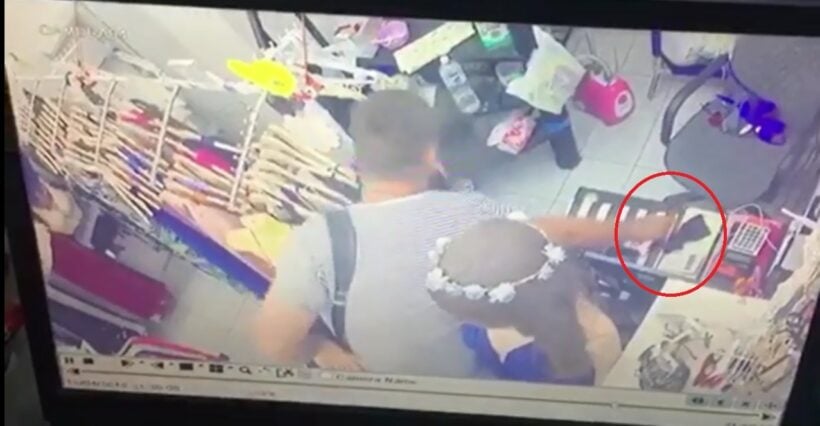 A video from CCTV camera footage shot at a clothes shop in Ao Nang, Krabi, shows a 1.32 minutes recording of a family of 3 – father, mother and a son, all western in appearance – stealing an iPhone X from the owner of the shop while pretending to be buyers.

The person who posted the video on social media is the owner of the shop who had her phone, an iPhone X worth about 47,000 Baht, stolen. Netdao ‘Amm’ Wiwatratsamee also offered 5,000 in cash reward for anyone who lead the police to arrest the robbers.

“There are so many robbers in Ao Nang. Here again, more tourist robbers. I think they were Russian. They came to the shop as a family with the father and mother about 30-40 years old and their 2 year old son. They pretended to shop inside, choosing some clothes.

The wife asked me to go to the front of the shop to grab her a product while her husband shamelessly stole my iPhone X that was charging at my cashier counter.

“I’m so furious. The phone isn’t cheap and I saved money to buy it for work. After only 7 days, it’s stolen. This incident happened on April 15 at 10 pm. I’ve already reported to police.

“The phone has already been shut down and the signal has been cut. You visit Thailand and do whatever you want. I know you stay in Ao Nang and if anyone spots this family, I’m glad to pay 5,000 Baht as a reward. I don’t want them to go back to their country without being arrested.

She said that she was alone at the shop during the robbery. After they left the shop, she still didn’t feel suspicious until she walked to the table expecting to take the phone and found only the charger left. She rushed to check the CCTV camera footage and found that the recent visitors were the robbers.

She added that she had 2 branches of the clothes shop and this branch is the newest one that opened in June last year, which has experienced 2 robberies already. The first robbery was a 700 Baht bikini. The robber returned back to the shop to rob again later before getting arrested.

“I feel disappointed and unsafe. I want to warn all the fellow citizens to be careful of these robbers who show up looking like tourists. This sting seemed to be well planned before arriving at the shop.”