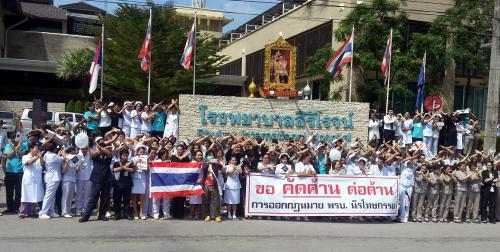 PHUKET: Opposition to the amnesty bill continued in Phuket yesterday as university alumni and hospital staff made their opinions known.

About 20 Chulalongkorn and Thammasat University alumni association representatives presented Phuket Governor Maitri Inthusut a letter of opposition to the bill while explaining how an amnesty could affect Phuket.

“If this bill passes, the nation as a whole will experience more corruption,” said Pronpinit Suwanna, president of the Chula Alumni Phuket Association.

“One of the jobs of a university is to teach students that corruption is wrong, to teach them that if we can get rid of corruption, that our nation will develop faster because all of our tax money will be spent on developing projects, not on commissions or bribes,” she said.

Governor Maitri accepted the complaint and said he would pass it on. “I will let the government know that a lot of people in Phuket don’t want the amnesty bill,” he said.

Meanwhile, about 100 employees of Phuket International Hospital gathered in front of the hospital with a sign protesting the amnesty bill.

Phuket rescue too late for chicken