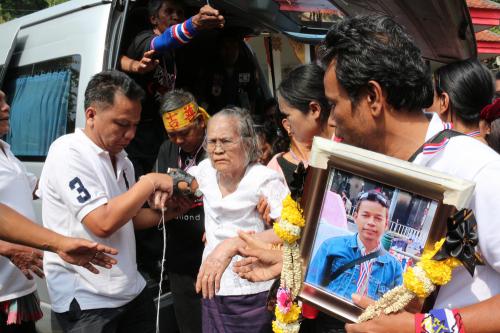 PHUKET: Hundreds of people turned out today to join the Choochan family in mourning the death of Phuket taxi driver Prakong Choochan.

Mr Prakong,46, died on Saturday from injuries sustained when an explosive device was thrown at protesters during a street march in Bangkok on Friday (story here).

His body was escorted home from Bangkok last night, and arrived in Phuket this morning (story here).

Funeral ushers had to restrain scores of attendees in order to make way for Mr Choochan’s coffin at Wat Ketho (map here).

Also in attendance were Phuket notables including Anchalee Thepabutr and Raywat Areerob, both Phuket Democrats MPs until the House was dissolved on December 9.

“What happened to my husband brought our family deep grief, but everyone understood him. We are proud of him, and we will all move on to support the protest,” Ms Tippayao told the Phuket Gazette as her husband’s coffin lay only meters away.

Ms Choey Choochan was visibly shaken by her son’s death.

“However, I am proud of my son. He died fighting for Thailand. It was the right thing to do.”

“I was living in Rassada while he lived in Patong, but he was always came to see me and always brought some food to take care of me,” she said softly.

Mr Prakong visited his mother before leaving for Bangkok.

“He asked me to join the protests in Bangkok. I said I couldn’t go as I am too old. I would only fall during the marches and rely on him to carry me.

“I wished him luck and to return home victorious,” Ms Choey said, before breaking down in tears.

Buddhist funeral prayers began at the temple at 7pm tonight and are to continue intermittently until Friday.

Mr Prakong’s body will be cremated at Wat Ketho on Saturday.