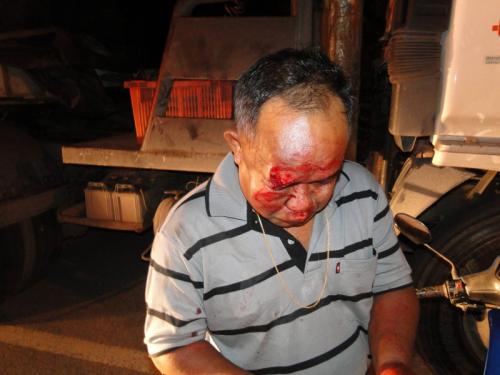 PHUKET: A man charged for drunk driving survived slamming into the door of a parked 18-wheeler in Phuket before dawn today.

Rescue workers called to the scene at 3am this morning found Nattapol Kansol, 44, with a bloodied face and injured eye next to his motorbike about 500 meters south of Tesco Lotus Thalang on Thepkrasattri Road (map here).

Witnesses said Mr Nattapol was driving in a drunken way before he slammed into the driver’s door of the parked truck, Sub Lt Yongyuth Pechnuam of the Thalang police said.

“He was uncooperative when we questioned him about the incident,” he said.

“We took him to Thalang hospital for treatment and have charged him with drunk driving,” he added.