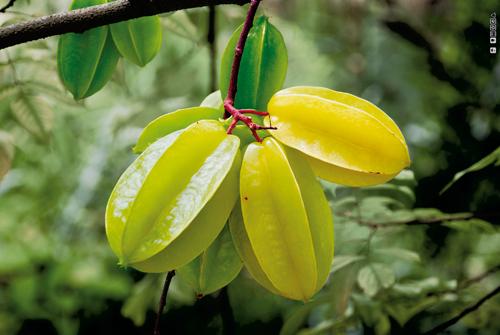 PHUKET: Today it is the turn of several small trees, which not only bear unusual and edible fruit, but will double-up as ornamental and shade-generating presences in your tropical garden.

Baccaurea motleyanais more familiarly known to Thais as rambai or mafai farang. In common with the other trees on parade today, it is primarily grown for its fruit. But its short trunk, wide crown and large shiny evergreen leaves (brown and hairy underneath) make it an ideal shade tree.

Although it grows wild in parts of Thailand which means it will adapt readily to more cultured surroundings it is grown commercially for fruit which contain a whitish pulp and up to five seeds. The size of golf balls, they are green when unripe, and pinkish or yellow in color when mature.

Oddly, they grow in large strands directly from the trunk as well as from branches. Velvety in texture, they vary in taste from sweet to sour and can be eaten raw or cooked. They are made into jams, chutney, even a sweetish wine.

The bilimbi is less popular in Thailand than it ought to be. In the Philippines, it is encountered everywhere as a front yard specimen, but despite the fact that it grows well in Thailand, it is less common here. A pity since it is an interesting and unusual tree with a branching habit, attractive pinnate leaves and fragrant, five-petaled flowers.

But the tree’s claim to fame, again, lies in its highly unusual fruits, which resemble small cucumbers about two or three inches long (hence its name cucumber tree). They are, smooth, glossy green and are borne most of the year round at the end of small branches. Extremely rich in nutrients, especially ascorbic acid, the fruits are much too sour to be eaten on their own , though a few hardy souls take them with salt.

Widely used in Southeast Asia in chutneys and curries,pickling reduces their acidity. Their skin is thin and delicate so care needs to be taken when gathering them. Now introduced to the New World and Australia, the bilimbi is a sound choice for a Thai garden because it is low-maintenance and enjoys a spell of dry weather. It is normally grown from seed.

The bilimbi is re- lated to another exotic sounding tree, the carambola (mafueng) which seamlessly takes us from “B to “C on our alphabetical journey. Actually its full botanical name is Averrhoa carambola , but it is usually referred to as the star fruit tree. The small clusters of flowers, reddish or purple , are similar to those of the bilimbi, but the fruits are very distinctive yellow green to orange, five-angled and up to five inches long.

If you cut a section through one, it will assume the shape of a star. Unlike the bilimbi, the fruit can be eaten straight off the tree. The leaves are blue-green on their undersides, up to four inches long and are sensitive to both touch and light, folding at night or if handled.

You will probably have difficulty finding potted saplings for your garden, but the star fruit, like the bilimbi, grows easily from seed and since the fruit itself is so readily available, this should present no difficulty. Just buy a ripe fruit and save the seeds.

The star apple or Chrysophyllum cainito is another multi-purpose tree. Commonly cultivated as a dooryard presence, it has amazingly spherical green fruit up to eight centimeters across which can be eaten when fully ripe. The tree has an attractive shape, with leaves which are shiny above and brown and silky below. Known as aphoen in Thailand , it appreciates a warm, humid climate. With regular feeding, it will crop well.

Tip of the week – Seed banking

Most plants reproduce by seeding. Seed banking involves collecting and storing these seeds. It is labor-intensive and best done by experts, but it is an insurance policy (cf. zoos) when plants are threatened with extinction.

For example, 12 species are now known to be extinct in the wild. Collected seeds, kept in optimum conditions, will remain fertile for a long time. Seed banks also offer a reliable source for the restoration of depleted habitats.

An organization known as the Mill Seed Bank Project is based in the UK, and has so far stored seeds from some 24,000 plants and estimated 10% of the world’s floral population.

Native flowers worldwide are threatened not only by loss of habitat to farming and development, but by climate change and the spread of invasive weeds.

If you encounter an unusual plant why not try to harvest a few seeds yourself.

Double the fun from Belgium