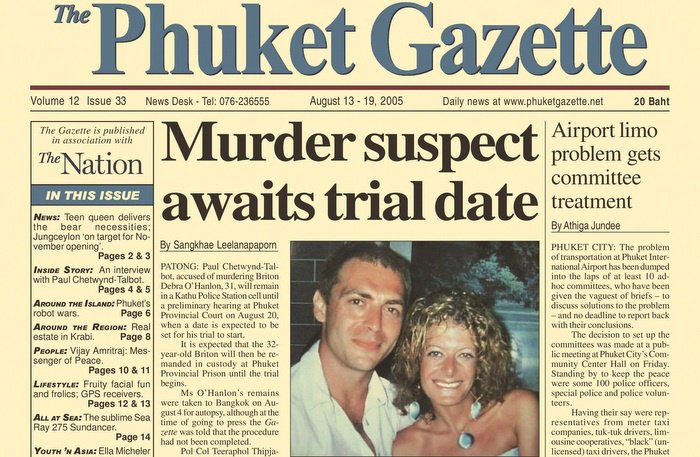 PHUKET: A picture of the smiling 31-year-old and her boyfriend at the time – the confessed killer – was page one of the August 13-19 issue of the Phuket Gazette. In hindsight, it is hard not to find yourself searching their eyes and faces for some hint of what was going to come during their time on this paradise island.

Not only was the case on page one, it was also the ‘Inside Story’, as the Gazette sat down for an exclusive interview with the killer, Paul Chetwynd-Talbot. Mr Chetwynd-Talbot was later sentenced to 10 years imprisonment.

Nonetheless, the senseless violence that occasionally sheds blood on this island, such as the man being shot in the stomach as hundreds celebrated the birthday of Guan Yu last week, seems to always find itself column inches.

However, a decade ago, the good news was Jungceylon.

Yes, that iconic shopping mall complex that has become the centerpiece to the island’s premier party town had yet to open its doors. However, developers confirmed to the Gazette that it was ‘still on target for opening in November.’

Jungceylon had already had its opening date postponed due to a shortage of labor during the post-tsunami recovery period.

Unlike the people behind the numerous unfinished objects [UFOs] seen scattered along the Andaman coast, here was one set of investors whose confidence has panned out like a gold digger’s just prior to the 1848 rush in California.

“The management of Jungceylon is confident that the complex will help attract tourists and investors both from Thailand and around the world to come and witness the opening ceremony,” the Gazette wrote, attributing this confidence to Rena Undomkunnatum of the management firm Phuket Square.

Eventually, Jungceylon would benefit the whole tourism industry in Phuket, she said – and boy, was she right.

The editorial in the August 13-19 issue also had a positive tone to it, as the island helped organize the ‘highly entertaining World Boxing Organization title fight between Ratanachai Sor Vorapin and Panamanian challenger Mauricio Martinez’ – anybody remember who won?

The fight for the island though was not the boxing match, it was the push to develop Phuket as a sports tourism destination, which has largely been a success due both to private investments by Laguna Phuket, Thanyapura and a number of other businesses, as well as the heavy marching by the government sector.

Where those who have heavily invested in Phuket and those charged with the governance of the island will lead us ten years from now is difficult to foresee. However, at least one week 10 years ago, there seemed to be a positive outlook for our future.