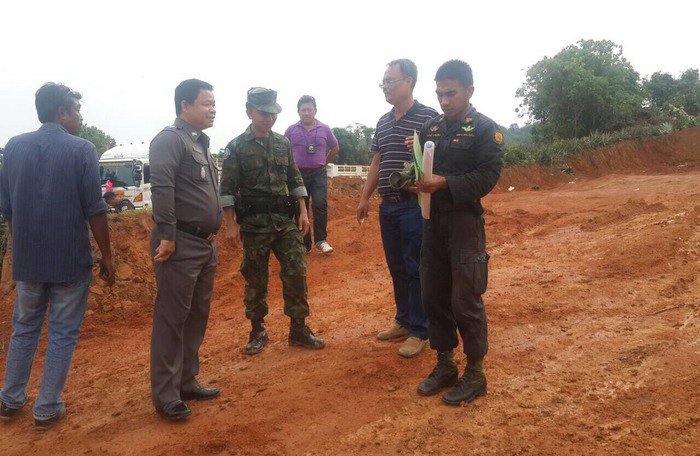 “The men were arrested on two different Mai Khao plots of land that have unclear borders that are most likely overlapping with preserved forest land,” said Lt Sompop Kamkana of the Royal Thai Navy.

“Additionally, one of the plots is on top of a mountain. The slope is greater than 30 degrees and is more than 80 meters above sea level, which automatically makes excavation illegal.”

The lower plot has been dug deeper than three meters, which requires a permit from the Natural Resources and Environment Phuket office, Lt Sompop noted.

“Both companies have excavation permits issued by the Mai Khao Local Administration Organization [OrBorTor], but they expired three years ago,” Lt Sompop said.

Police seized a total of five backhoes and eight dump trucks from the sites.

“The men at the lower site told us that Mai Khao OrBorTor President Sarawut Sisakukam was the owner of the plot of land,” Lt Sompop said.

“Phuket Governor Nisit Jansomwong has created a committee to investigate Mr Sarawut, as well as other Mai Khao OrBorTor staff, about the process of issuing the permits,” he added.