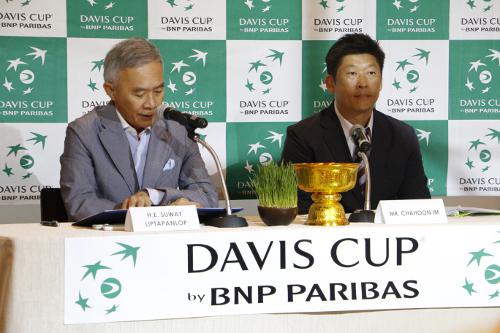 PHUKET: The drawing for the first round of match pairs in the Davis Cup BNP Paribas Group II, Zone Asia/Oceania (Thailand vs Hong Kong) was held this morning at Phuket’s Thanyapura.

In the second Friday match, Wishaya Trongcharoenchaikul will play against Ognian Kolev, with more games to follow on Saturday and Sunday (click here).

Among VIPs present at the conference this morning was Suwat Liptapanlop, the president of the Lawn Tennis Association of Thailand who is the organizer of the event. The drawing of competing pairs was performed by ITF referee Mr Chahoon Im.

To be aired live on True Visions (True Sports 7), the tournament is open to the public, admission-free.

Davis Cup began in 1900 as a competition between the USA and Great Britain. It’s now the world’s largest annual international team competition in sport, with 130 nations competing in 2013.