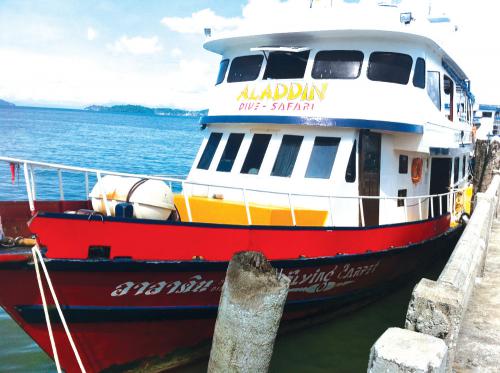 PHUKET: The freak accident that sank a liveaboard dive boat to a depth of 75 meters just outside the popular dive destination of Similan National Park was unavoidable, said the Regional Marine Office chief this week.

MV The Flying Carpet based out of Ranong and operated by Aladdin Dive Safari had its propeller partially ripped out between Koh Bon and Koh Tachai on January 29. All on board were safely rescued.

“We got a rope in the propeller that actually broke the propeller off, not all the way, but that’s why water came inside the boat too [fast] to pump it out,” reported the company manager, who asked to be identified only as Frank.

Accidents like this are nearly impossible to prevent, noted Wichai Khamkong, Director of the Marine Department’s Region 5 Office.

“It is not easy to see rope or other debris in the sea that might damage a boat,” he said.

Shortly after the news of the ship’s rapid sinking broke in the Swedish tabloid Aftonbladet, allegations of the ship not being fit for sea, registered or even insured began to spread.

“The accident had nothing to do with the condition of the boat or where it was operating. It was legally registered with state insurance and not overloaded,” he confirmed.

“The captain and crew of the rescuing boat MV Peter Pan acted valiantly and swiftly in their rescue of everyone on board the sinking ship.

“What they did was very impressive.”

A total of 13 people, including the ship’s captain and crew, were rescued.

The Office Manager of the Similan Seven Sea Club, which owns the Peter Pan, confirmed that his ship and staff took part in the rescue of those on board The Flying Carpet. However, he declined to comment further on the incident.

There will be no attempt to salvage the 19.2m wooden Flying Carpet from the depths, confirmed Frank.

“All the people were saved. Everybody is fine ‘people-wise’. It’s just a loss on our side that the boat is gone, everything. Nobody was injured,” he said.

Though he branded the accident as unavoidable, Mr Wichai said his officers had ramped up measures to ensure local tour boats were seaworthy.

“What we can do now is continue to check boats three times a month to make sure they are legal, are properly registered and safe,” Mr Wichai said.

“We also continue to demand that boats have enough life jackets for everyone and that captains do not overload their boats.”

The punishment for operating an overloaded vessel is a fine of up to 10,000 baht, six months’ imprisonment, or both.

“Captains and crew members must remember that safety is top priority – people’s lives are in their hands when they head out to sea,” Mr Wichai said.