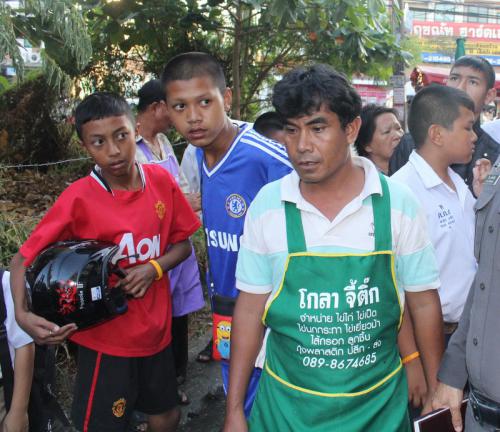 PHUKET: A longtime vendor of Thai mini-crepes saw his sidecar shop burned to a crisp after a gas leak yesterday afternoon.

It took firefighters 20 minutes to put out the fire, near Muang Municipal School in Phuket Town.

“I’ve been selling mini-crepes (kanum tokyo) to Muang Phuket School students every evening for a long time,” said the 44-year-old owner of the stand, Prayoon Inpuang.

“Today when I started to make the desserts, I smelt gasoline and heard the sound of it leaking.”

As Mr Prayoon was searching for the source, the sidecar caught fire. He shouted for help from nearby vendors, but the stand was quickly engulfed in flames.

“I couldn’t believe my eyes; the crepe stand was my only source of income,” said Mr Prayoon.

When officers arrived at the scene, they found a crowd of people gathered around the blazing sidecar, said Capt Porntip Choomsri of the Phuket City Police.

The flames had gotten high enough to reach and burn the electrical wires hanging above the stall, the cost of which Mr Prayoon will have to cover.

“I don’t have money to pay for the burnt electrical wires. I just lost my job. I don’t know how I will make money in the future,” said Mr Prayoon.

Firefighters managed to subdue the flames, but the damage to the sidecar was already done.