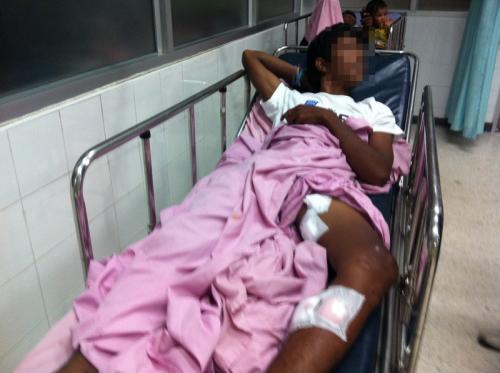 PHUKET: A 16-year-old boy from Rawai was shot in the leg four times by a gang of teenagers in a reprisal attack in Phuket Town last night.

The teenager, given the pseudonym “Korn” by police, was shot multiple times at the Esso gas station near the busy Slaughterhouse Intersection (map here) at about 9:20pm.

“When we arrived at the gas station, we saw pools of blood on the ground but the boy had already been rushed to Vachira Phuket Hospital by his friends,” said Maj Rattaket Munmuang of the Phuket City Police.

At Vachira Hospital, Korn told police the attack happened after he and his friends went to a computer game shop in Soi Pattana 14, off Pattana Road nearby.

“After the shop closed, we sat at the laundry shop across the road,” he said.

“While we were sitting there, a gang of about eight teenagers, who we had argued with before, rode past. A little later, they rode back, pulled out knives and started walking toward us,” Korn alleged.

“We all ran. I made it to the gas station before they caught up with me. They hit me, shot me in the leg and rode away,” he said.

“My friends arrived soon after and took me to the hospital,” he added.

Maj Rattaket said his officers were continuing their investigation on the presumption the attack was motivated by revenge.

“We will collect more evidence and question more witnesses to track down the teen gang,” he said.