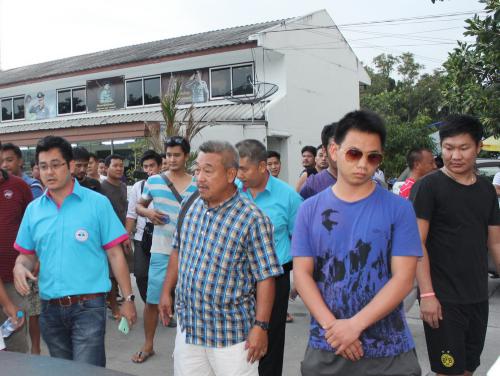 PHUKET: Scuffles broke out in front of Wichit Police Station yesterday as tensions boiled over between Chinese-speaking Thai tour guides and Chinese nationals who they accuse of taking their jobs.

More than 100 Thai guides gathered at the station in support of Suraphol Saelub, 24; Somchai Saetung, 39; and Ja Saema, also 39, who all face charges of attacking Chinese national Ta Leng in a restaurant near Wat Nakaram (map here) on Sunday.

“He filed a complaint that he was attacked by six Thai tour guides, and that he was struck on the head with a bottle during the attack,” Col Chawalit said.

“We invited Mr Leng and the three men he accused to come to the station on Monday so we could question them,” Col Chawalit said.

Tempers boiled over as Mr Leng and his work colleagues left the police station after the meeting. Angry guides accused Mr Leng of working as an illegal guide and questioned the ethics of his employer.

“Illegal guides are a serious problem for us. Working as a guide is a job reserved [by law] for Thais, but many tour companies hire Chinese nationals as guides,” said Chaifu Saelee, a 43-year-old Chinese-speaking tour guide.

“They are taking our jobs and we are left with no work, so we would like officials to help to find a solution to this problem,” he said.

In April last year, Mr Chaifu led a protest group of tour guides to complain to Governor Maitri Inthusut that over 300 Chinese guides were stealing their jobs (story here).

Last July, Mr Chaifu noted that there were not enough legal Chinese-speaking Thai guides in Phuket and encouraged the local government to remedy the situation. He also urged police to diligently check tour companies to make sure they were complying with guide laws and not hiring Chinese citizens as guides (story here).

To bring the issue to the attention of Phuket’s top-ranking official once again, tour guides will march from the Clock Tower Circle (map here) to Provincial Hall (map here) on Friday to hand a formal complaint to Phuket Governor Maitri Inthusut, Mr Chaifu added.