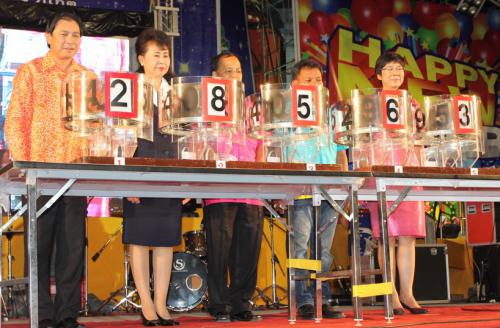 PHUKET: One lucky person has yet to learn that he has won the top prize of 750,000 baht in gold from the lucky draw at the annual Red Cross Fair, which drew to a close on Sunday night.

Even the winner of the second prize has yet to step forward to claim 375,000 baht in gold bars, Sarawut Rukkaw of the Phuket Red Cross told the Phuket Gazette yesterday.

Phuket Governor Maitri Inthusut led the draw for the top prize at 10pm on Saturday at the central stage at Saphan Hin (map here), where the annual fair was held.

“The holder of the winning ticket has yet to contact us to claim the prize,” Mr Sarawut confirmed.

“But organizers will wait until the top two prizes have been claimed before holding a formal handing over of the prizes by Governor Maitri,” he explained.

Some of the fourth-prize winners have already stepped up to claim their one gold bar valued at 37,500 baht.

“The lucky three-digit number was 379. Anyone who holds a ticket ending with 379 may claim the prize of an electric fan. Winners have until February 28 to claim their prizes,” Mr Sarawut said.

To claim a prize, winners may present themselves and the winning ticket at Phuket Provincial Hall (map here), the Phuket Red Cross office (map here), or any District Office in Phuket during office hours.