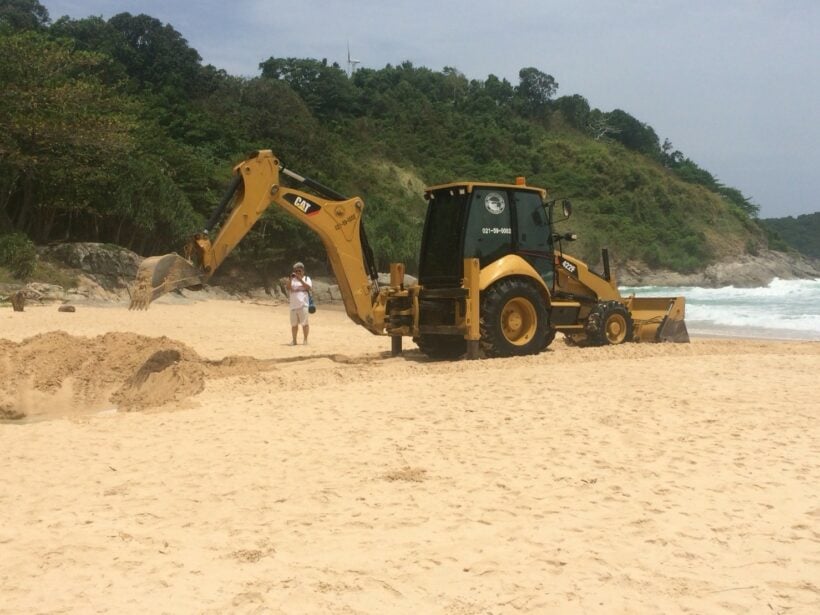 A channel has been dredged to connect Nai Harn beach with Nai Harn Lake to allow the crocodile to move in, making it easier to catch (The Thaiger suspects the crocodile might be on to the officials’ Cunning Plan).

More than 50 officials and a specialist crocodile catcher team from Surat Thani have been planning to catch the crocodile while Nai Harn beach is now closed. The official ‘catch’ team has been patrolling around the area where the crocodile was last seen in the hopes that the crocodile may become weak and come ashore.

The team from Surat Thani joined the crocodile search operation this morning along the shores of Nai Harn and nearby beaches, while the search teams and fishermen were battling strong winds and waves.

Since 10am, the crocodile has been seen about ten times but hasn’t yet come up on the beach.

A team led by Nikom Suksawat, a crocodile-catcher from the Surat Thani Fisheries Office, and Rawai Mayor Aroon Solos have hatched a plan to catch the crocodile by dredging a channel connecting Nai Harn Beach with Nai Harn Lake (the natural channel frequently cuts off access at different times with the tides and the weather).

The crocodile catchers believe that this one is a freshwater crocodile as the crocodile keeps trying to approach the beach to get out of the sea.

“The crocodile is above the water at least every 15 minutes for breathing. If it was a sea crocodile, it would have already gone.”

“If the crocodile moves into the lake it will be easier to catch as the lake is a closed area.”