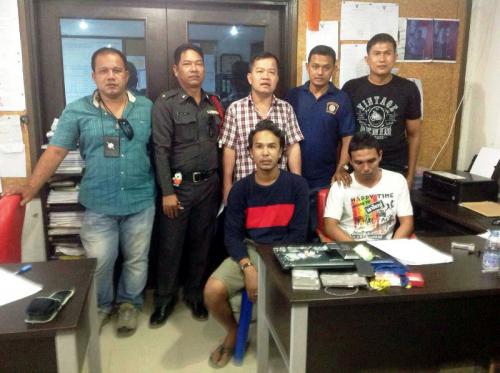 PHUKET: Two brothers were arrested on drugs charges on Friday, with police suspecting that the siblings were using a hotel room in Cherng Talay to store and sell their wares.

“We received a report from one of our undercover agents about the brothers renting a hotel room to store drugs, and we obtained a warrant to search their house in Baan Bang Tao,” Cherng Talay Police Deputy Superintendent Saad Wongwiangjan explained.

“We first came across Natthawut Srisamut, who is 25 years old. We presented the warrant and searched the house,” Lt Col Saad told the Phuket Gazette.

“In the bedroom we found Weerawat Srisamut, 27, lying in bed and we found 18.3 grams of marijuana packed in two small plastic bags on the bed,” he explained.

The brothers were taken to the police station for questioning.

“The brothers confessed that they were storing some ya bah [methamphetamine] and ya ice [crystal methamphetamine] in a guestroom at the Kanita Hotel to sell to the guests,” Lt Col Saad said.

“Police officers took them to the hotel and searched room number 201. We found ya bah packed in three plastic bags, totaling 30 pills. We also found seven plastic bags packed with ya ice, containing 3.08 grams in total,” he explained.

Police say drugs paraphernalia was also found in the room.

“Both brothers were charged with possession of a Category 1 drug with intent to sell,” said Lt Col Saad.