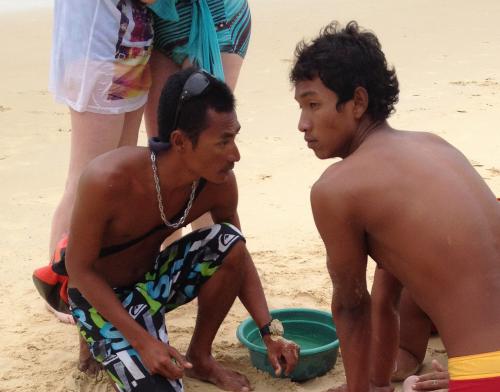 PHUKET: A British tourist drowned at Karon Beach yesterday afternoon, hours after a heavy weather warning was issued for Phuket and other areas along the Andaman coast.

Police named the victim as Edward Joseph Brookes, 63, from England.

“By the time lifeguards noticed Mr Brookes was in trouble, he was about 70 meters from the shore,” Mr Uten said.

Lifeguards rushed out and brought him back to the beach. They administered cardiopulmonary resuscitation (CPR), but were unable to revive him.

“While we were giving him CPR, beer came out his mouth,” Mr Uten added.

“He was pronounced dead on arrival,” Mr Uten said.

Mr Brookes’ 60-year-old wife, Marion, told lifeguards that the couple had just finished lunch when Mr Brookes decided to go for a swim.

“She confirmed that her husband drank beer with his lunch,” Mr Uten said.

“She stayed on the beach, and had no idea what had happened until lifeguards brought her husband back on shore,” he added.

Karon Beach has gained a notorious reputation for surf safety over the years. The tourist-popular beach is prone to large waves and dangerous rips during the southwest monsoon season.

Late last month, two more tourists – a Russian man and a Chinese man – drowned within hours of each other at the same beach (story here).

“People in Phuket and other provinces should beware the current severe weather,” the TMD announced.

Strong wind and waves of two to four meters high were forecast to plague the Andaman Sea.

All ships were warned to proceed with caution and small boats were urged to keep ashore.

“The weather is changing, and the danger is changing from rip currents to hard-hitting waves, especially near the beach,” he said.

“Please be careful. Even in water only knee-high, the waves can knock you down and hurt you,” he added.