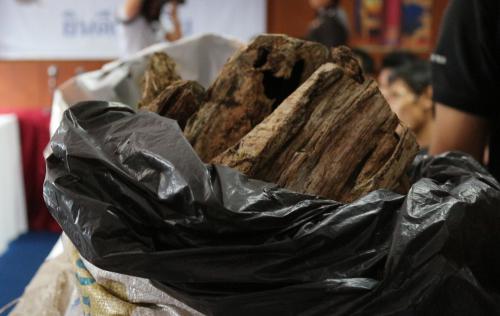 PHUKET: The battle against illegal loggers in Phuket continued this week as Thung Thong Police arrested six suspects for the illegal possession of more than 50 kilograms of eaglewood with a street value of more than 300,000 baht.

One of the men was found with an illegal .45 handgun, fully loaded, under his pillow.

Armed with a search warrant, police arrested the suspects at two rental houses near Kathu Municipality Kindergarten (map here) at 8:30am.

Five of the suspects were arrested in one house, explained Thung Thong Police Superintendent Thitirat Asakit.

A total of 53.2 kilograms of eaglewood was found hidden throughout the house.

“Wirat Sunsuwan, 38, from Songkla, was arrested in the house next door. He was found with a loaded .45 handgun under his pillow in the bedroom,” Col Thitirat said.

Suspect Mr Thanad told police that the five only collected the wood from a site near the Bang Wad Reservoir.

“We did not cut any trees. A man called Mr Sorn was to pick up the wood from us and he was going to smuggle it into Malaysia,” he said.

“I think we have could made 300,000 to 400,000 baht, and this eaglewood was not high quality. Eaglewood can be much more expensive, it depends on its quality,” Mr Thanad noted.

Eaglewood trees are wanted for the aromatic resin they produce. The resin is used in making incense and perfumes.

The samples seized in the raid on Monday had been treated and were ready to be sold.

“There is a lot of eaglewood in Phuket, and a lot of people taking it,” Mr Thanad said.

“Police will continue to question the suspects so we can learn more about the network of illegal loggers operating in Phuket,” he added.