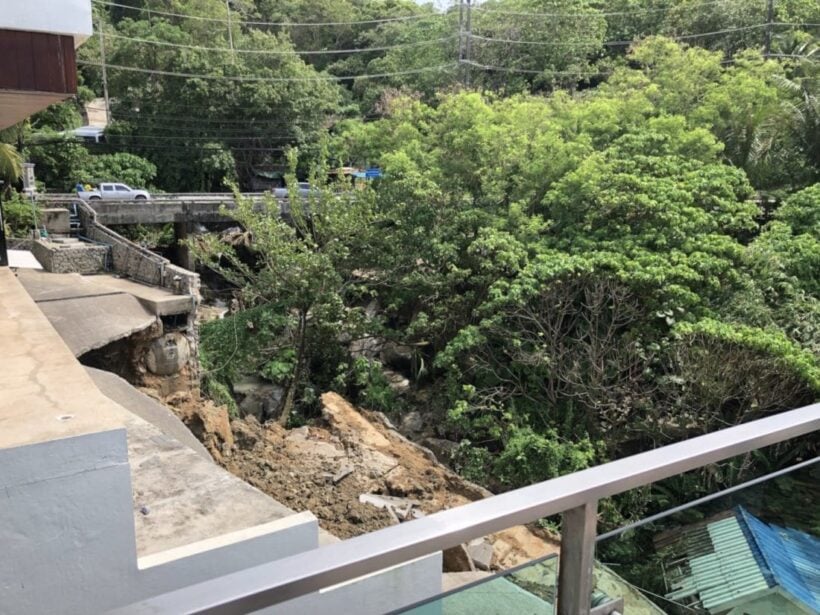 Clean up efforts are well underway following damage to the Patong-Kamala coast road on Tuesday.

A damaged bridge was checked yesterday. The Kamala Administrative Organisation (OrBorTor) has issued  a temporary ban for the use of some damaged areas which are part of a hotel adjacent to the road’s main bridge.

A team of officials, led by the Phuket Vice Governor Prakob Wongmaneerung, inspected the area which includes a bridge on the Patong – Kamala road, as well as a soil retaining wall which is part of U Zenmaya Hotel. The wall collapsed after Tuesday’s flash flood. Officials have also discussed repairs with executives of the hotel.

It was concluded that the Phuket Highway Office would provide engineers to check the bridge. Following an immediate engineering inspection they decided that the bridge is still completely stable and can handle the weight of vehicles. Damaged connection roads to the bridge are being fixed and soil has been removed from roads surfaces along the route.

The OrBorTor Kamala has also issued a temporary ban to use some areas of the U Zenmaya Hotel where a soil retaining wall was damaged by the flash floods. It is expected to take about 20 days to fix the damaged retaining wall and hotel walkway structures.

The hotel building itself has been checked and not found not to have encountered any problems. During the repairs customers have been moved to another hotel.

The Thavorn Beach Village Resort & Spa Kamala also encountered a lot of landscape damage following the flash floods and have moved their customers to some of their other hotels whilst affecting repairs.