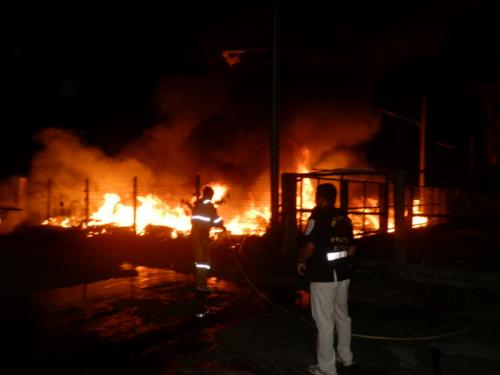 Firefighters arrived soon after 8pm to find the yard next to the TT&T main office building – located opposite the Isuzu showroom, north of Boat Lagoon (map here) – engulfed in flames

“About 10 firetrucks from four municipalities – Koh Kaew, Rassada, Cherng Talay and Pa Khlok – were dispatched to put out the fire,” said one Kusoldharm Rescue Foundation worker at the scene.

The combined force of about 20 firefighters battled for an hour before bringing flames under control.

Among the cables destroyed were heavy-grade telephony wires as well as reels of fiber-optic cables.

“The cause of the fire has yet to be confirmed. We are waiting for experts to check,” Mr Songphol said.