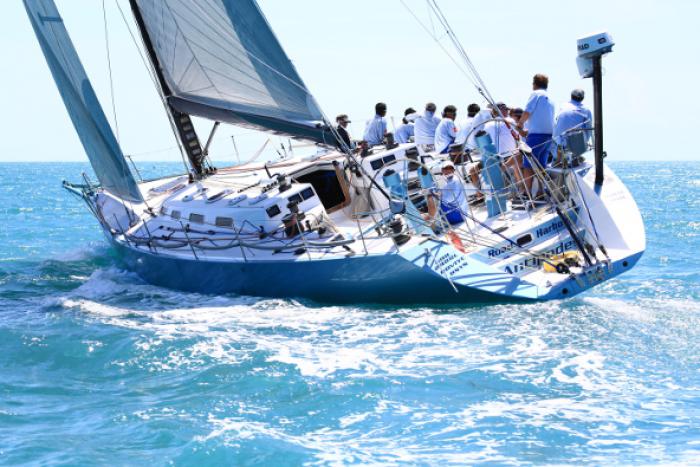 PHUKET: The Samui Regatta, which gets underway this weekend, heralds a big gun showdown between Foxy Lady VI and Red Kite II for the right to be crowned champions in the Asia Yachting Grand Prix (AYGP) 2014.

Foxy Lady is unbeaten this year and hot on a six-regatta streak after winning the IRC2 class at Top of the Gulf earlier this month. But skipper Bill Bremner not only needs to win the class at Samui, the last fixture on the Asia Yachting circuit this year, but also pick up the bonus points for wins in eight races.

Having dominated their class in Hong Kong for the past few years, newcomer Red Kite II, an Archambault 35 helmed by Anthony Root, made the decision last year to race the Southeast Asian events.

Winning their class at the 2013 Phuket King’s Cup and placing second-in-class at the 2014 Royal Langkawi International Regatta, they have made their intentions clear.

Although Red Kite has a handy lead in the AYGP series, the Phuket Gazette has been told that helmsman Root is taking no chances. He reportedly will be boarding a plane for Thailand immediately after attending his daughter’s university graduation in the United States on May 25 so he can join the racing.

Other big boats to contest the top-flight class at Samui include Peter Ahern’s Oi! from Australia, fresh from winning IRC1 at the Top of the Gulf, as well as Geoff Hill’s 72ft Antipodes and Neil Pryde’s 52ft Hi Fi, both from Australia, and Frank Pong’s Custom 75 Jelik and Sam Chan’s TP52 Freefire, both from Hong Kong.

Joining the race fleet will be Ben Copely’s Swan CS42 Katsu and the Malaysian Navy will race two entries: one crew aboard the modified DK46 Uruanus and the other on the racing-pedigree TP52 Ulumulu.

Ray Roberts and his renowned Evolution Racing crew, however, will not be competing this year due to injury.

The 30-strong fleet already confirmed to race in the regatta is set to deliver some top quality competition and likely to decide who will be crowned AYGP champions for 2013/14, said Race Director Simon James.

“The quality of the entries is looking exceptional, not only in the racing and top IRC fleets but also among the cruisers and charter boats,” he said.

“Last year there was some very close racing on-the-water often with just seconds separating boats on corrected time, and looking at the boats and crew this year I would expect the competition to be just as close and in some cases, even more so.”

All eyes will be on the start line, where aggressive tactics are common when the stakes are high, and tight racing on the track.

New to the Samui Regatta, but with the familiar face of Michael Spies on board, is the Corby 36 Jessandra II (ex Rockall III, ex Rosie). Skippered by Roland Dane, principal of Red Bull Racing Australia, the team won the Audi Australian IRC Championship in 2012 and remained unbeaten in competition.

After resting the boat last season, in January this year they finished second overall to Black Jack 2 (ex Telefonica V70) in the Surf to City and have now shipped to Asia to compete on the Asian circuit.

A strong showing from local boats and charter crews in the cruising/charter classes include Moon Shadow, Freewind (2013 class winner), Sunsail Anchali and Sailquest Paprika II, to name a few.

Among them will be Patinyakorn “Ging” Buranrom, who last year became the first-ever Thai entry in the Transpacific (Transpac) Yacht Race, will be racing in the IRC Cruiser class on board Sansiri.

“We’re pleased to see new boats coming to Samui and the Regatta. For some it may be their first time to Samui Island. We’ve been working closely with the local government and relevant agencies; the island is ready and the Regatta is ready to welcome all participants,” Mr James said.

A late development was the cancellation of the multihull class, Mr James confirmed on Tuesday.

“It is sad to see this, especially as Peter Wilcox had sailed his fast catamaran Mojo around Singapore to compete in the Top of the Gulf and the Samui regattas,” he said.

Mojo finished in style in the Ocean Multihulls class at the Top of the Gulf Regatta, with a win on the final day, enjoying the strong breeze to sail to a six-second victory on corrected time over Kirati Assakul’s Sonic, whose second place in the race was enough to claim second overall by a single point over fellow Thai multihull sailor Radab Kanjanavanit.

With the Samui Marathon and the Jazz Festival cancelled this year, Mr James lauded the support from the local government.

“The Provincial Governor and the Province of Surat Thani have given their full support,” he said.

Other key government offices supporting the regatta included the Ministry of Tourism and Sports Surat Thani office, the Municipality of Koh Samui, the Sport Organization of Thailand (SAT) and the Tourism Authority of Thailand, Mr James noted.

Key support since the regatta’s inception has been from venue host Centara Grand Beach Resort Samui.

“For the 13th consecutive year, this leading lifestyle and sporting event has attracted competitive and social sailors from around the world. It has become one of Asia’s most glamorous sailing events and Samui’s main event for the year,” said Martin Heiniger, Area General Manager Samui.

“Centara Grand Beach Resort Samui is synonymous with the regatta having been its home base since the first event in 2002, and we’re proud to be part of it.

For full racing schedule and more details on the fleet, parties and scuttlebutt, visit SamuiRegatta.com, www.facebook.com/SamuiRegatta or follow twitter.com/samuiregatta.