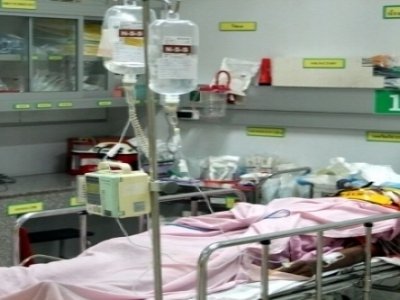 PHUKET: A man is in critical condition at Vachira Phuket Hospital after being shot twice in the back of the head in downtown Phuket Town over the weekend.

Phuket City Police were notified of a shooting in front of the Rattana Mansion apartment block on Chana Jaroen Road at 3pm on Saturday.

“Officers questioned Nuttawut’s friends, who said that they joined him earlier that day for a karaoke singing session at the amusement arcade on the second floor of Ocean Plaza shopping mall. They were sitting on a sofa, waiting in line in front of karaoke room two, when another group of youths arrived,” said Lt Col Sermphan.

The cause is unclear, but the two groups had an immediate, mutual disliking. Nattawut and friends followed the other group to karaoke room 20, where a fight ensued. After the fight, both groups left the area, said Lt Col Sermphan.

The violence had not ended, however.

“Nuttawut and four friends were on motorbikes and preparing to leave the parking area in front of the Big One convenience store, next to Rattana Mansion, when three men drove up on a Honda Wave. One of the three drew a gun and opened fire, hitting Nattawut twice in the base of the skull.

The caliber of the weapon was not announced by police.

No witnesses at the scene were able to remember the color or license plate number of the vehicle, but after reviewing the CCTV images, police believe they know the identity of the assailants and are searching for them now.