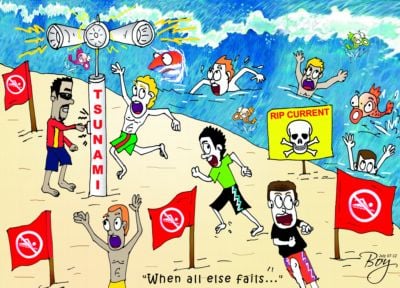 PHUKET: A recent poll conducted by the Phuket Gazette reveals that readers are evenly divided on which of six possible approaches would be most effective to minimize the number of lives lost to drownings during the monsoon season every year.

For details of the poll and its results, click here.

As noted by many who commented in our readers’ forum, the results seem to indicate that perhaps there is no single best solution to this very serious problem, and that a multi-tiered strategy combining all of the approaches is needed.

As argued in this space before, however, the Gazette believes that in-flight warnings would be the most effective and easy-to-implement strategy for educating tourists about the murderer in Phuket’s rip currents.

Putting up more signs in more languages would be a fine idea if our beaches weren’t already so cluttered with visual messages. Lifeguards face a similar signal-to-noise problem; tourists are so bombarded with touts, propositions and other unwanted vocals that they naturally tend to “tune out” anyone who approaches them – even if that person might come bearing information to save their lives.

The idea of getting police involved might likewise save some lives, but it is hardly rational to expect Phuket’s law officers to help keep tourists out of the water when they can’t even keep motorists on the correct side of the road.

In-flight warnings would be far more direct and effective. For a start, airline passengers are the very definition of a captive audience. People may tune out on the ground when the flight attendants go into their pre-takeoff safety spiel, but they are certainly more likely to pay attention in airborne mode if the captain comes on to speak about a life-or-death safety issue.

Introduced from the cockpit, a short, Phuket-specific video explaining the dangers of Phuket’s rip currents in a matter-of-fact way would almost surely get the attention so sorely needed, and would therefore be highly likely to save multiple lives – every year.

The Phuket Gazette, through its television arm PGTV, would be happy to produce and provide, free of charge, the necessary footage to any airline willing to help by showing it to passengers.

The Gazette has already attempted to persuade one of the most popular inbound airlines to help save lives in this manner, but without success.

We were told that the request “has to come from local tourism authorities”.

For this reason, we would urge that the Tourism Authority of Thailand, the Tourist Police, the Thai Hotels Association, the Phuket Chamber of Commerce, the Phuket Tourist Association, The Phuket Lifeguards Club, Phuket International Airport, the Governor’s Office, the OrBorJor and the Honorary Consuls work together to draw up a request for presentation to each and every airline flying into Phuket.

It may be too much to ask, but knowing what we do know about our beaches, are we not morally obliged to try?