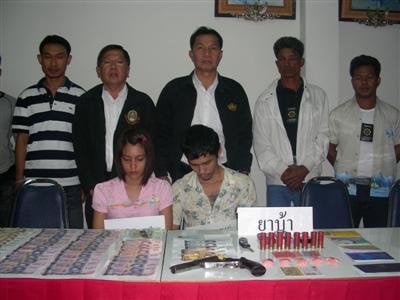 The arrests were announced by Phuket Vice Governor Worapoj Ratthasima and Muang District Chief Wisit Kurattanavej at a press conference at Muang District Office at 9:30 this morning.

The arrest followed reports from informants that the pair were selling 10 to 20 ya bah pills at a time to clients in and around Phuket City at a price of 300 baht per pill.

The special operations officers arranged to buy 10 pills at a price of 3,000 baht during a rendezvous at Bangneaw Intersection at 2:30 am.

The couple arrived in a dark blue Honda Civic. After the transaction was complete, officers quickly surrounded Natchapong, who was standing outside the vehicle.

A search of the suspect uncovered 587 ya bah pills and 63,660 baht in cash. A search of Natthanaree uncovered 100 more pills. All the seized pills were branded with the “WY” logo, indicating they were produced in Burma.

Both confessed to charges of possessing a Class 1 narcotic with intent to sell and were taken to the Phuket City Police Station.