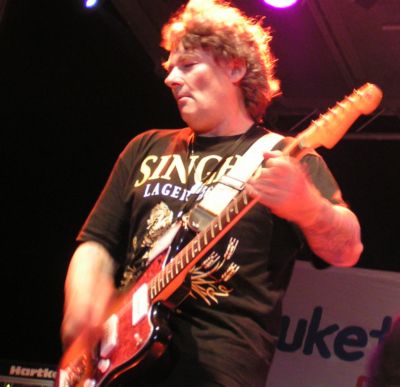 KARON: Blues fans were treated to a lineup of local and international acts last night at the first night of the Phuket International Blues Rock Festival at the Hilton Phuket Arcadia Resort and Spa.

Gates opened at 6 pm and the crowd slowly swelled as the acts played late into the night. Bangkok-based Soi Dog Blues Band were the first to get the crowd onto its feet with a lively set.

Yet it was guitarist Steve Plater of Australian blues band Salty Dog that set the crowd abuzz with his version of the Venture’s classic Walk Don’t Run and other classic blues tracks. The crowd knew they were in for a treat when Plater opened the set with his custom cigar box slide guitar.

Also performing last night were Li’l Willie & The Fabulous Hepcats, Georgia Blues Band, and Full House. The night closed with returning headliners The Rich Harper Band from the US.

Tonight from 7 pm there will be six more hours of rock and blues featuring The Groove Doctors with Jimmy Fame; Boy Blues Band; The Blues Machine; Cannonball and Bonnie Anderson; and blues-soul vocalist Shari Puorto from Los Angeles.

Tickets are 700 baht, or 3,000 baht for VIP seating, and can be bought at the gate or from Wine & Taste at Laguna; the Holiday Inn Resort Phuket in Patong; The Sandwich Shoppes in Patong and Chalong; Don’s Mall in Rawai; and the Kata Beach Resort and The Boathouse in Kata.

Tickets can also be reserved via email at info@phuketbluesfestival.com or by calling 086-6822639.