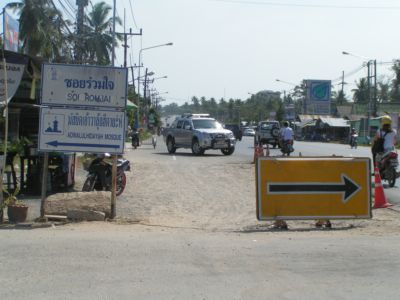 RAWAI: The incomplete section of Wiset Rd near Soi Romjai [in Thai, Soi Ruamjai] remains unfinished because the owner of the land refuses to sell, Saroj Suvinchai, director of the Phuket Provincial Highways Office (PPHO) has told the Gazette.

Repeated attempts by the PPHO to buy the land, measuring 20 meters by five meters, have failed, K. Saroj said, adding that he knows that the blocked lane has become the site of many accidents.

“We are still trying to reach an agreement with the landowner, Krissana Samart, who refuses to sell the land,” he said.

K. Saroj explained that when building or expanding a public road, a royal decree giving the PPHO authority to expropriate land to make way for the road is usually issued.

In this case, however, almost all of the landowners involved agreed to sell their plots for the compensation offered, so a decree was not issued, he said.

“We still don’t know how to deal with K. Krissana. We can’t force him to sell. We are willing to pay compensation of up to 400,000 baht for the land, but he wants 5 million baht,” K. Saroj said.

He added that Phuket Governor Niran Kalayanamit had also unsuccessfully attempted to negotiate with K. Krissana.

K. Saroj urged motorists to exercise caution when driving along Wiset Rd and to understand that the PPHO is not ignoring the problem. “We are trying to find a way to fix this problem as soon as we can,” he said.

Despite repeated attempts by the Gazette to reach him, K. Krissana has been unavailable for comment.