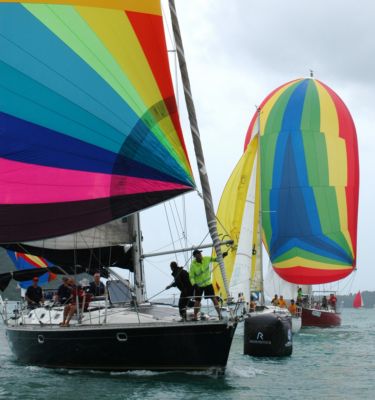 AO CHALONG: After torrential downpours delayed the start of the first race yesterday morning, crews racing in the Six Senses Phuket Raceweek regatta were blessed with steady winds of more than 10 knots pushing the record fleet around the courses.

The fleet of 44 yachts, competing in seven classes, faced miserable conditions as heavy rain forced organizers to delay the day’s racing until around midday when conditions eventually became more favorable.

When racing finally got underway, the skies had cleared but the wind continued to blow at a steady 10-15 knots, giving the skippers some exciting conditions to race in.

Conditions were so good that the race marshals decided to stage two races for six of the seven classes.

Veteran Australian skipper Peter Ahern on Yo2! proved too quick for his competitors in the top-flight IRC 1 class, winning both races comfortably.

Phuket 8 Raimon Land, better known locally as Somtam Express, was close behind, finishing third in the first race and second in the final race of the day.

Ben Copley’s Katsu finished second in the first race and third in the second race.

bounced back with a win in the second race, with Roger Kingdon’s Moto Inzi finishing second and Mamba finishing third.

The annual Phuket Raceweek has grown steadily since it’s inaugural regatta five years ago, with more than 500 people involved in this year’s event and the number of entries up 40% on last year.

The action continues off the Evason Resort each day until the final day on Sunday.

As many protests were lodged after the end of yesterday’s racing, the provisional results above are subject to change, depending on the race committee’s decisions.

For the latest results, visit www.phuketraceweek.com