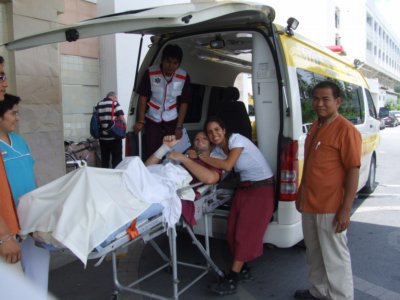 PHUKET CITY: Israeli tourist Adam Berdichevsky, whose left foot was mangled during the boat capsizing that claimed the life of another Israeli tourist on September 4, flies back to Israel tonight after a week of treatment at Bangkok Hospital Phuket.

Mr Berdichevsky, discharged from the hospital around noon today, is scheduled to fly back to Israel tonight accompanied by his father and an Israeli orthopedist flown in to observe his treatment.

It was earlier feared that doctors might have to amputate all or part of the foot.

“With kind coordination from the Israeli Consul, a plane with a stretcher on board has been arranged. Doctors said Adam is fit to fly. He will undergo further operations in Israel, where he will also undergo therapy and rehabilitation to enable him walk again,” wrote Dr Sompoch in an incidence report released to the media today.

Mr Berdichevsky was a passenger aboard the 17-meter dive vessel Dream Catcher, which capsized in stormy seas on the way to Maya Beach from Phi Phi Don on September 4.

Another Israeli tourist, 26-year-old Nissim Lugasi, died when he became trapped in the boat’s bridge and drowned.