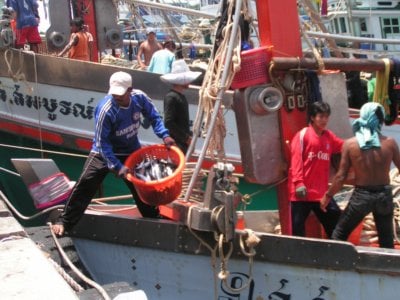 Port Manager Pramual Rakjai announced at the monthly Governor Meets The Press event on September 3 that following inspections by the Fishery Department in May this year, Phuket Fishing Port is now certified for standard hygienic operations.

The certificate was presented to Dr Suwichai Suparanont, Director of Thailand’s Fishing Market Organization, by Ministry of Agriculture and Cooperatives Deputy Minister Dr Rungruang Isarangkura during a recent ceremony at Phuket Fishing Port.

Phuket Fishing Port renovations were part of a 299-million-baht project, with support from both the Fishery Department and Fishing Market Organization, to improve hygiene standards of fishery operators in Phuket and nearby provinces

The renovations, completed in July 2006, include facilities to ensure hygienic operations and transportation of seafood for fishery operators, on-site waste water treatment to supply clean water, and measures to check and prevent formalin contamination while preserving of fresh seafood.

“We are pleased to announce that all fresh seafood passing through the port meets international standards and is safe for consumption. No Formalin was found in any of the samples examined in tests conducted by the Fishery Department of Ministry of Agriculture and Cooperatives (MoAC), qualifying Phuket Fishing Port as a formalin-fee fishing port,” K. Pramual said.

Formalin is 10% solution of formaldehyde in water, commonly used as a disinfectant.

“Our treated water complies with Pollution Control Department regulations for biological oxygen demand (BOD) levels. All wastewater from the port is released into the Tha Chine canal only after it is properly treated and has a BOD of about 16 ppm, far below the PCD maximum of 200 ppm,” he added.

Phuket Fishing Port is now ready to be a center for tuna distribution, as Phuket has its own processed tuna factories and cold storage facilities to support this industry, K. Pramual said.

Moreover with the international airport and its facilities, Phuket has all elements in place to support Phuket Fishing Port’s development into a regional tuna export hub in the near future.

Phuket Fishing Port serves about 20 fishing boat operators, with a total of about 200 vessels, and processes some 20,000 metric tons of seafood worth over a billion baht annually. Most of the fish processed at the port is tuna bound for Japan.