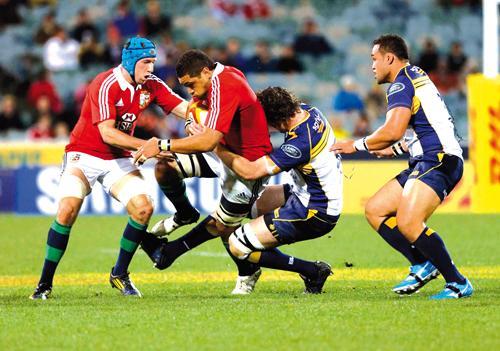 PHUKET: In sport, truth is often stranger than fiction. If someone had predicted that 36-year-old Shane Williams (who retired from international rugby two years ago), Brad Barritt (on holiday in the US) and both Christian Wade and Billy Twelvetrees (part of the recent tour of Argentina with England) would all be down under and playing in the last and crucial State game before the first Lions Test against The Wallabies, one would have doubted their sanity. Yet such is the injury count among the tourist backs that this is what happened.

The main reason for these draconian management measures was further injuries sustained during a bruising battle with the Waratahs. Though the Lions won convincingly 46-19, they lost Test center Jamie Roberts with a torn hamstring and having already declined to risk Brian O’ Driscoll, George North, Tommy Bowe or Manu Tuilagi (all carrying knocks), the team had a makeshift look. In the event, they performed heroically, with Leigh Halfpenny again the star with 30 points, and Jonathan Davies offering a complete performance at outside center. Ten of this side will probably start the First Test, including the front five.

Sadly, the “reserve” team’s subsequent display against the Brumbies in Canberra on Tuesday was an anti-climax. Unsurprisingly, the reinforcements performed like players either short of practice or unused to each other, the set piece was dysfunctional with Best’s throwing inaccurate, and Hogg, playing in the unaccustomed position of outside half, too often chose the wrong tactical options in a woeful first half. Though there was more urgency to their play in the second period, the Lions surrendered their unbeaten record, losing a tight game by 14-12.

In New Zealand, the top ranked nation lead France 2-0 in a three Test series. The first Test was close, with France belying their Six Nations form with a spirited display, in which Wesley Fofana scored a typically dynamic try to give France an early lead. If they were eventually unlucky to lose 23-13, they were then outclassed in the second game by a clinical All Blacks side, reaping the benefit of collective training, France conceded thirty points without reply.

Elsewhere in the rugby-playing world, there has been much activity and some surprises. In Japan, a Welsh team shorn of all its Lions and controversially lacking the experienced James Hook and Dwayne Peel, could only draw a two match series with the host nation. Also unexpected was Scotland’s defeat by the feisty Samoans in South Africa, a defeat which shows that they, in common with Wales, have limited strength in depth. The outcome of this quadrangular tournament, which also features Italy and South Africa, hinges on the final game between the hosts and Samoa..

England, it seems, have no such problems with reserve strength. A young and inexperienced side inflicted on Argentina the first whitewash ever achieved by a visiting English team. They convincingly won the first game by 32 points to 3, and in a much tougher second encounter, triumphed 51-26.

The tour produced some new international stars, especially in the three quarters where Christian Wade, Marlon Yarde, Kyle Eastmond and Jonny Maywere formed part of a rapier-sharp back division. Yarde scored twice on his debut and Eastmond beat five men in a run reminiscent of Jason Robinson at his best.

Forward dominance led to two penalty tries. Having won seven of their last eight games, England will go into the autumn internationals in the knowledge that they can, like New Zealand, field two very different teams of international standard.

As for the wounded Lions, they must raise their game against the Wallabies in the first Test in Brisbane. Not helped by the news that Digby Ioane, the Wallabies’ star winger had declared his fitness for the encounter. Bring it on.

The Lions play their first Test against Australia today at 5:05pm, followed by a match against the Melbourne Rebels on Monday, June 25 at 4:40pm.