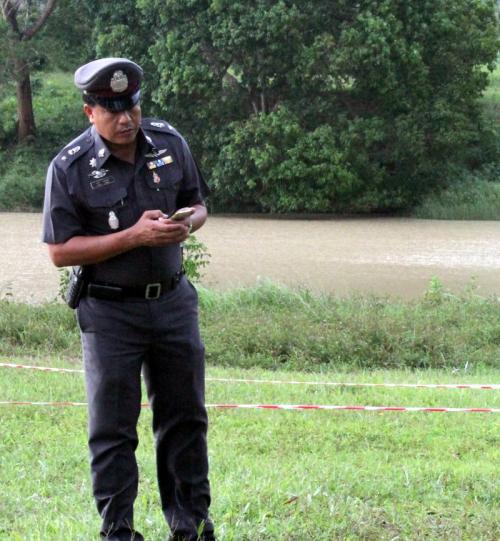 PHUKET: Police are trying to establish the motive behind the torturing and execution of a man whose body was found in Koh Kaew, north of Phuket Town, yesterday morning.

“I was jogging at about 6am when I saw something in the grass. I went over to see what it was, and I was shocked to find the body of a man. I called the police immediately,” Mr Chalerm told the Phuket Gazette.

Mr Niwat’s body was found near a lagoon about 500 meters from the British International School – Phuket.

Police believe several people were involved in the crime and that Mr Niwat was killed elsewhere and his body dumped by the lagoon.

“Mr Niwat’s hands were tied behind his back with a black shoelace and his head was covered with a black-red sarong,” Phuket City Police Inspector Yongyuth Kongmalai told the Gazette.

The body showed signs of the man having been tortured.

“There were many cuts on the body; most were about 10 centimeters long. There was a deep cut above his left eyebrow and cuts on his upper lip. His upper teeth were all smashed.

“He appears to have also suffered a blow to the back of his head by a hard object,” Lt Col Yongyuth explained.

No potential murder weapon was found, but officers did record car tyre tracks found at the scene.

“We found a Nokia mobile phone about 30 meters from the body,” he said.

“Mr Niwat had no criminal record, so we do not believe the motive for the murder was drug or gang-related. We will continue with our investigation and arrest the murderers,” Col Yonyuth said.

World rugby round up – Wounded Lions