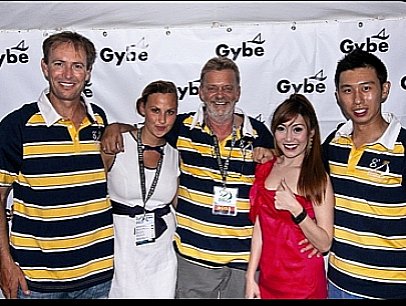 PHUKET: Australian Paul Larsen and his DaVinci crew raced in to second place after an exciting four days of Multihull class sailing at this year’s Six Senses Phuket International Raceweek.

Racing conditions in the waters off the Evason and Bon Island resort for the event were exciting, but certainly less threatening than what Paul has been used to over the past 14 years aboard some the fastest sailing vessels to ever grace the oceans.

Paul’s taste for speed on the water developed when he crewed for Bruno Peyron on Explorer. In 1998 they established a best trans-Pacific time, crossing between Yokohama, Japan and San Francisco in 14 days, 17 hours and 22 minutes.

There was no doubt that when Peyron organized the first “no holds barred” round-the-world yacht race in 2000, Paul would be involved. Securing himself a place on Pete Goss’ Team Phillips, a 120-foot catamaran, the goal was to win and do so in the fastest time.

Unfortunately, during final sea-trials three weeks before “The Race” was due to begin the whole crew had to abandon the boat valued at £4 million (190 million baht) in mid-Atlantic waters.

Although disappointed, the stubborn antipodean was not going to sit out the most challenging sailing experience of his life. The Race started on December 31 with Paul joining the crew of Tony Bullimore’s Team Legato that very morning. Nearly 105 arduous days later they arrived back to Barcelona, Spain from where they set out.

Bullimore’s name is recognizable from the widely reported resuce, which came after five days spent in an upturned hull, having capsized during the 1996 Vendee Globe single-handed around the world race.

Paul’s Team Phillips skipper, Goss, also made a name for himself during the same race when he turned his boat around and sailed for two days into hurricane winds to rescue fellow competitor Raphaël Dinelli.

In 2002, as watch-leader and helmsman on Tracy Edwards’ Maiden 2, Paul helped secure the outright 24-hour record when they traveled 1,118 kilometers in a single day averaging 28.95 knots or 53.3kms per hour.

In that same year, the Vestas Sailrocket (VSR) concept took shape and a path to speed sailing’s outright record was laid out.

As pilot and project leader, Paul has been instrumental to the boat’s development over the years, and on March 8 the VSR 2 was launched to continue attempts at the record.

“The record has been raised by nine knots in nine years and our focus now is to achieve the outright record,” said Paul.

“For a brief moment the VSR1 was the fastest boat in the world, but we never nailed the outright record. We’ve learned a lot over the past years and most of that knowledge has come from our failures, not the successes,” he added.

The record must be ratified by the World Sailing Speed Record Council (WSSRC) and in fact Paul does hold the B class record over 500 meters at 47.36 knots, set in Walvis Bay, Namibia in 2008.

Paul enjoys discussing all aspects of the record attempts from design to piloting. He also explains, in simple terms, how the boat manages such incredible speeds.

“We chose Walvis Bay in Namibia for the wind conditions in the area that spill out from the headland and coastal dunes – ideal for our requirements,” he said.

“A massive amount of power is generated by using the speed of the boat itself to make more wind. I start off at 90 degrees to my course with a good wind and as the boat accelerates, the wind created by the boat speed is added to natural wind,” he added.

“It’s like being able to convert a strong breeze of 32kph into a gale force of 80kph,” he added.

At these speeds, particularly in a boat that weighs 275 kg unmanned, lifting or tipping plays a large part in design concerns.

“Someone trying to tip you over by pushing at the soles of your feet could push you sideways, but not over. Opposing forces of water and wind are aligned and this same theory allows us to handle a lot more power without tipping over like most other sailing craft,” Paul said.

“Of course I’ve had a few scares. I’d like to tell the story of how I broke the record, but getting out of the cockpit with just a few bumps, bruises and a cracked helmet after a high-speed crash is also a good one to tell,” he said with grin.

Paul will be in Namibia this September to continue his attempt at the record and hopes to return for Raceweek next year with a few more stories.

Phuket Poll: When will Thaksin return?