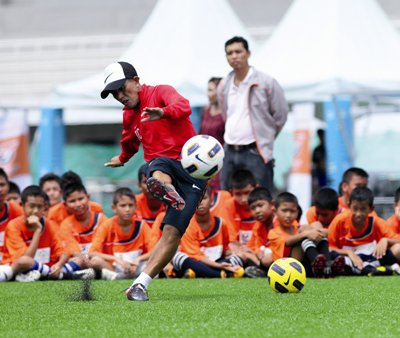 The free coaching clinic was organized with the help of Thanachart Bank and ran between 8am and 11am on July 30. Over 30 children took part and thoroughly benefited from the experience.

Therdsak was full of praise for the facility and for the organization of the day’s event.

“The stadium is great, I think it is suitable for national or international camps too. Thank you to the TSLC, all the sponsors and the children. I came to Phuket a long time ago with the national team, but this is my first time in this facility,” he said.

He also took note of the enthusiasm of those who participated despite the session only running for one day.

Asked abouit his team’s [Chonburi FC] title aspirations for this season, Therdsak voiced his confidence that the “Sharks” would prevail.

“Chonburi FC will certainly be the [Thai Premiere League] champions this year, I think we can beat Buriram FC,” he said.

World record on the cards for Raceweek’s Larsen