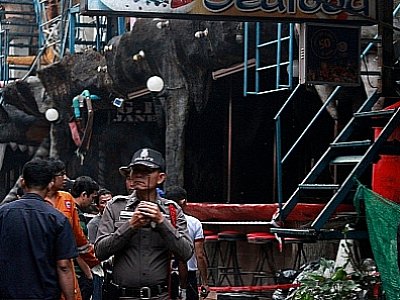 PHUKET: The findings of an official investigation into the Tiger Discotheque fire that killed four people on August 17 were publicly released yesterday. They cite failure by nightclub management to adhere to multiple fire-safety regulations.

The report, compiled by the Building Society Inspectors and Officers Association (BSA) and the Association of Siamese Architects (ASA), did not cite the cause of the fire, but did give clear evidence that the venue was not in compliance with the provisions of several fire-safety codes.

The disco had improper placement of fire extinguishers and faulty emergency-exit ladders, and used a highly-flammable foam for wall and ceiling decorations, said the report.

Some of the emergency-exit ladders were found to be too short to reach the ground, which matches witness reports of individuals being forced to jump from the burning building.

The report also supported evidence that the decorations on the ceilings and walls of the building were made of highly flammable expanded polystyrene (EPS) foam, which is now illegal to use inside buildings.

“We have just received the report from the BSA and the ASA today. However, it does not cite the cause of the fire. We are still waiting for another report about the cause of the fire, from the National Office of Forensic Science,” Patong Police duty officer Jongserm Preecha told the Phuket Gazette today.

Patong Police Superintendent Chiraphat Pochanaphan says that “The forensic report is expected to come out on September 24 [Monday].”