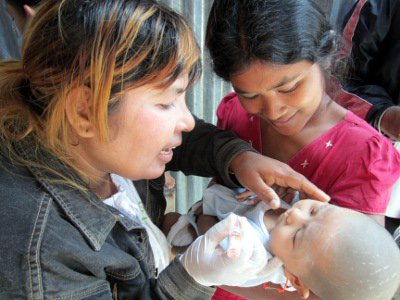 PHUKET: The Phuket office of the World Vision Foundation in Thailand, operating under the Supanimit Foundation, yesterday stepped up its anti-polio campaign, in line with the World Health Organization (WHO) push to eradicate the disease.

“The Phuket City team divided into two groups. Myself and two Burmese officers from Front Social Network covered the Rassada community, Saphan Hin and behind the main branch of Super Cheap.

“The other teams, which also included FSN workers, covered outside Phuket Town,” he explained.

Although the teams started their rounds at 7am, many Burmese children were not at home because their parents took their children with them to work.

“We will return in the evening to cover the rest of the children,” Mr Surachet said.

The teams will continue their anti-polio campaign in Phuket on January 18, he added.