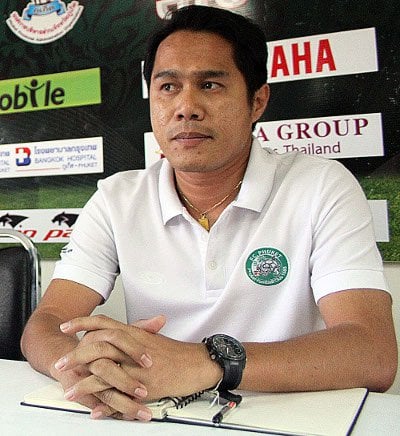 PHUKET: The Phuket Provincial Administration Organization (OrBorJor) will cease its financial support of the island’s professional football club, FC Phuket, starting next season, one of the club’s managers confirmed today.

He confirmed that Thailand’s Auditor-General’s Office had conducted an investigation of Phuket OrBorJor affairs about three weeks ago, and concluded that its sponsorship of the team is illegal.

“OrBorJor President Paiboon Upatising confirmed to me that they [the OrBorJor] will stop financial support by next season. We have to find a new sponsor, and will discuss [the matter] among the club’s executives later,” he added.

Despite media speculation that the team would not survive, Mr Narubas insisted that FC Phuket, as known as the “Southern Sea Kirin”, will prevail next season.

“This is a problem for the [club’s] executives, and there is no need for the players to worry. We will find money for them to ensure they perform [well] in the field. They are professional enough to do their best at their job,” he added.

Mr Paiboon will hold a press conference soon in response to a report that said he had stepped down as Club Chairman and will be replaced by OrBorJor Executive Jirayus Songyos, Mr Paiboon’s secretary told the Gazette today.

Meanwhile, the after taste of last week’s 7-0 slaughter at the boots of Buriram FC has cast doubt among many Phuket fans as to how their side will perform in Saturday’s match in Bangkok.

Their opponents, Thai Honda, are ranked last in the Thai Premier League Division One 18-team league, and even though Phuket trounced Honda 6-1 back in May, Thai Honda will be giving it their all in this rematch in order to avoid relegation with only three matches left to redeem themselves.

Speaking about the Phuket’s readiness for Saturday’s bout, Coach Sompong “Rock Rhino” Wattana confirmed that Abdoul Coulibaly will be rejoining the team after missing the Buriram match due to a booking ban.

A few players will not be available, however, namely Niran “Noom” Panthong and Kone Adama, who both caught colds because of cool weather in Bangkok, Coach Sompong said.

With Abdoul back, the team has to drop Seksit “Harf” Srisai from the starting lineup since they play the same midfield position.

“There are no problems for forward positions, which will be filled by Watcharapong ‘Pae’ Jun-ngam and Tameezee ‘Z’ Hayeeyusoh,” Coach Sompong said.

“There is a small problem in the midfield. We got Abdoul back after his ban, and he will play in the center with Sarach ‘Tang’ Yooyen. Jongrak ‘Bank’ Pakdee on the right, and normally, Noom plays the right, but since he’s got a cold, I may replace him with Poramat ‘Mud’ Krongborisut, but have yet to decide on that.

“In the backs, Nenebi and Wiratrot ‘Too’ Chanteng will take the center, while Ronnachai ‘Art’ Jinakate takes right back and Nitipon ‘Bas’ Limsuwan left back.

He also blamed cold weather for the 7-0 loss at Buriram last Sunday.

“It was very cold in Buriram – only 18ºC. With such cold weather, the players’ performances dropped a bit. We aren’t used to such weather change,” he said.

Saturday’s match with Thai Honda FC will kickoff at 4pm.

Trailing third place BB Chula United by 17 points, Phuket have no chance for promotion to the elite Thai Premier League next season with only five fixtures remaining.

After Saturday’s match, Phuket will return home with three consecutive home matches before finishing the season with an away match.

Saturday January 14 vs Chainat FC (Away)