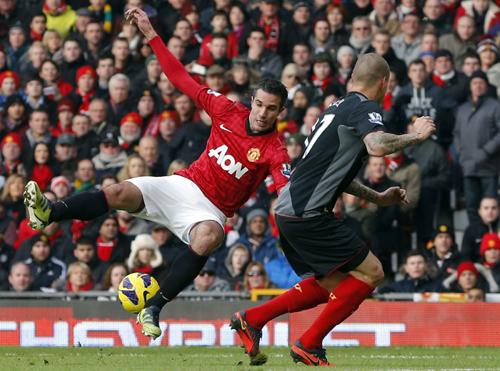 United sealed a needlessly nervy 2-1 home win over eighth-placed Liverpool to maintain their seven-point lead after Van Persie with a goal and Patrice Evra with two assists put rival Luis Suarez in the shade.

In contrast, the game in London was never in doubt with City winning 2-0 for their first league win at Arsenal in 38 years.

City were given a helping hand by the 9th-minute dismissal of Arsenal’s Laurent Koscielny for wrestling Edin Dzeko to the ground before both James Milner and Dzeko netted before the break.

Liverpool have had to watch with horror over the last two decades as big rivals United undisputedly crowned themselves kings of the English game, trampling over the Anfield side’s legacy after they had shone the brightest in the 1970s and 80s.

The first half at Old Trafford, which followed United’s 2-1 win at Liverpool in September, suggested talk of the balance of power should be replaced by whisperings of the huge gulf in class such was the ineptitude of Brendan Rodgers’ side.

“Robin van Persie is different class. He produces moments in the game others can’t do and we are glad he is on our side,” man of the match Danny Welbeck told Sky.

“We had our game plan and it worked really well in the first half. They came into it more in the second half but we got the three points and showed our character.”

Forward Welbeck, preferred to the in-form Javier Hernandez in the absence of the injured Wayne Rooney, justified his start with some good play although he should have done better twice in the first half when almost clean through.

Van Persie, who now has 17 goals as the league top scorer, had another chance just before the break as United overran their toothless north west neighbours but he oddly chose a cheeky flick which Martin Skrtel cleared just before the line.

Suarez failed to do so last season at Old Trafford after serving an eight-game ban for racially abusing the Frenchman.

The arrival of the lively Daniel Sturridge at halftime for his Premier League debut after joining from Chelsea and the fact they somehow went into the break just 1-0 down boosted Liverpool’s confidence in the second half.

It was soon dampened when Van Persie’s free kick was headed goalwards by Evra, prolific for a left back with four goals this term, and the ball deflected off team mate Vidic before bulging the net. No Liverpool players appealed for offside but replays showed the Serbian was just ahead of their back line.

Liverpool’s defence and especially Johnson had been found wanting for the goal but Sturridge dug them half out of a hole when he struck after 57 minutes when Gerrard’s piledriver could only be palmed into his path by goalkeeper David De Gea.

England’s Sturridge then missed three decent chances as United boss Alex Ferguson fretted in the dugout and visiting Real Madrid manager Jose Mourinho, scouting United ahead of their Champions League clash, raised an eyebrow beneath the hood he used to shield himself from the cold and the cameras.

As it was, United closed out the win without further alarm.

City were hardly ever in danger at sixth-placed Arsenal and despite the angry response from the famously placid home fans, referee Mike Dean had little choice but to dismiss defender Koscielny for the offending bear hug and award a penalty.

Dzeko’s spot kick hit keeper Wojciech Szczesny, rebounded off the post and ran along the line into the Pole’s grateful arms.

Arsenal fans, held up coming into the ground because of a suspect package, could have been forgiven for thinking it might be their day after all but it soon turned into another painful game for a team who have not won a trophy since 2005.

City have usurped Arsenal as continual title challengers and their class against 10 men soon told when Milner rifled in a smart effort in the 21st minute after a good Carlos Tevez pass following a quick free kick.

Arsenal supporters also outraged by the free kick award sang “1-0 to the referee” but that was disingenuous given the foothold of Roberto Mancini’s side and it was soon 2-0.

England midfielder Milner whipped in a cross and though the keeper stopped Tevez’s close range effort, Dzeko could not miss.

Arsene Wenger’s team barely threatened with the inconsistent Theo Walcott isolated up front and proving again that he is not the finished article by blasting one good chance woefully wide.

City’s Vincent Kompany was harshly sent off for a robust challenge with 15 minutes to go but the second half was largely a non-event in the cold, somewhere Liverpool and Arsenal could be for quite some time given United and City’s dominance.

European round-up
Another goal from the prolific Lionel Messi helped Barcelona to a 3-1 victory over Malaga in La Liga as the leaders ended the first half of the season with a record points haul.

Juventus’s lead in Serie A was cut once again after they were held 1-1 at Parma.

Spain
Unbeaten leaders Barcelona ended the first half of the season with a record 55 of a possible 57 points when Messi scored one goal and had a hand in two more in a 3-1 win at Malaga on Sunday.

An 18th victory in 19 games for Tito Vilanova’s side restored their 11-point lead over second-placed Atletico Madrid, who earlier secured a 10th win in 10 home matches this term with a 2-0 success against Real Zaragoza.

Barca’s win also extended their advantage over arch rivals Real Madrid to 18 points after the stuttering champions, mired in third, were held to a 0-0 draw at bottom side Osasuna on Saturday.

Messi’s goal was the World Player of the Year’s 28th in the league this season and the ninth straight game he has scored, a personal best and one short of the La Liga record last achieved in the 1996-97 season by former Barca striker Ronaldo.

Italy
Juventus, eight points clear at the top of Serie A before Christmas, had their lead cut to three by Lazio after they were held 1-1 at Parma.

Andrea Pirlo gave put Juventus ahead early in the second half with a free kick which was deflected in by Jonathan Biabiany but Nicola Sansone kept Parma’s unbeaten home record intact with a 77th minute equaliser.

Lazio took advantage of the result by beating Atlanta 2-0 with a controversial second-half goal from Sergio Floccari, who appeared to control the ball with his hand, and an own goal by Davide Brivio.

Napoli stayed two points behind Lazio in third with a 3-0 win over Palermo while Cagliari’s 2-1 win at home to Genoa lifted them out of the relegation zone.