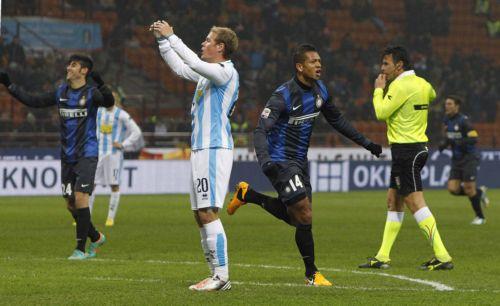 Goals in either half from Rodrigo Palacio and Fredy Guarin gave Andrea Stramaccioni’s side their first win in four games and moved them up to third in the table on 38 points.

Pescara remain in 16th place on 20 points, four points above the relegation zone.

Inter’s victory gave them hope they might be able to catch Antonio Conte’s champions, who on Sunday face Parma (1400 GMT), the only side yet to lose at home this season.

“The most important thing is that Inter have rediscovered that balance on the pitch … and I think today we made progress in terms of our play against the type of side who will often have 10 men behind the ball all game,” Stramaccioni told reporters.

“Every time we’ve come up against a side that defends with lots of players we have a much harder time of it than we did tonight.

“We have a lot of players out and I think we did well because we didn’t concede anything and created plenty of chances, and I think part of Pescara’s poor performance was down to our good play.”

It took Inter half an hour of toil to open the scoring, with first Palacio going close on seven minutes and then Antonio Cassano forcing a save from Mattia Perin 10 minutes later.

It was a superb Cassano flick that led to his strike partner Palacio giving the hosts the lead, the Argentine taking advantage of his team mate’s vision to roll his sixth goal of the season past Perin.

Palacio had a goal ruled out for the most marginal of offside calls less than a minute after the break, and Esteban Cambiasso was lucky not to give away a penalty a minute later when he handled in the box.

Inter doubled their lead on 54 minutes through Guarin, who was on hand to tap into an empty net after excellent work on the right from Palacio.

Pescara gave up the ghost after that, and Inter could have added to their lead on more than one occasion.

It was Palacio who forced Perin into his best save of the match on 82 minutes with a powerful left-foot strike after being fed by Marco Benassi, but Stramaccioni’s team wasted a host of promising positions.

Inter had several players missing through injury and suspension, while Wesley Sneijder continues his exile because of a contract dispute, but their squad players, including 18-year-old midfielder Benassi, who made an impressive Series A debut, were too strong for Pescara.

“Taking part in my previous matches (in the Europa League against Rubin Kazan and Neftchi Baku) helped me with keeping my emotions under control tonight,” Benassi said.

Earlier, Bologna eased their relegation worries as two goals from Gilardino, his first in nearly two months, led them to a comfortable victory over Chievo.

Panagiotis Kone and Manolo Gabbiadini also found the net to lift Stefano Pioli’s side to 13th in the table on 21 points, five clear of the relegation zone. Chievo stay in 11th spot.

A heart lost in Seoul: an English professor struggles with life after love in Phuket